The Significance of Satoshi Square

For those who aren’t aware, Satoshi Square is a meet-up group with the specific purpose to facilitate the bitcoin to cash exchange.  Bitcoiners meet up in person (yes, they often leave their computers) and interact in real life with each other to buy and sell the bitcoin currency.

Note:  In this article, I will differentiate the bitcoin currency with the “capital B” Bitcoin network. 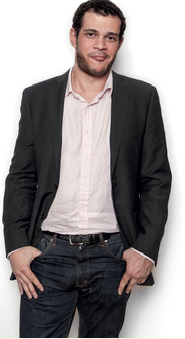 I recently interviewed Josh Rossi, the founder of Satoshi Square, and asked him about how it came in to existence.  Rossi said “the main initial purpose was to increase liquidity in the bitcoin currency.”  He continued on about how the exchanges were difficult to fund, difficult to navigate and the interaction with the banking system was a large obstacle for new Bitcoiners .  Furthermore, Satoshi Square attempts to relax each of these barriers while decentralizing the bitcoin to paper money exchange.  Rossi saw the utility of the Bitcoin network but understood that it was useless if bitcoins were not being exchanged and if new Bitcoiners could not easily enter in to the crypto-currency economy.

At the time, Mt. Gox was servicing nearly 70% of all bitcoin exchange and was starting to have some serious issues.  Before long, Gox’s bank accounts were seized by the “powers that be” and many thought this was one more nail in the Bitcoin coffin.  With so much difficulty suddenly coming to surface, having the ability to add liquidity which didn’t require a bitcoin exchange would strengthen the Bitcoin economy and create a multi-headed hydra which couldn’t be defeated by simply closing a single entry point.  The ability to buy and sell in person with cash would create a dynamic network of real-time, mini-exchanges and would diversify the bottlenecks and chokepoints associated with a general lack of liquidity when the exchanges become inaccessible.

This isn’t an article to smash Mt. Gox, but the troubles associated play an important role in the evolution of Bitcoin.  Along with the excahnges, the banks played a large role in limiting the liquidity and ease to buy/sell bitcoins.  In order to fund an exchange, Alice the Bitcoiner must go to her bank and send an international wire to a country which she has probably never visited.  This makes her uncomfortable and second guess her new digital money adventure.  In the US, for example, Alice would need to send a SWIFT wire and like any other government mandated program, the only thing “swift” about this legacy money transmitting protocol is the name.

International wires are accompanied with plenty of AML “Anti Money Laundering” questions from the bank as well as expensive fees and a general uncertainty on how long the wire will take to transmit and if the wire will be received correctly.  That is, of course, if you bank was willing to send a wire from your account at all.  Needless to say, this painful process has deterred more than a few Bitcoiners from being able to buy bitcoin and remains a hurdle for both the novice and experienced.

Here I should mention that BitInstant also played a significant role in resolving a lot of these banking issues and deserves much praise.  The difference is that with BitInstant, the interaction still required the banking system (and all of the associated regulations) which ultimately brought about their demise.

Then there was the hack attack on Mt. Gox which compromised thousands of accounts and countless bitcoins.  Another nail in the coffin?  Many thought so, but with Satoshi Square you no longer need to depend on a 3rd party and you can verify the arrival and safety of your bitcoins instantly.  You are now in control of who you exchange with and how best to protect your coins.  Mt. Gox had taken another blow to their credibility and the need continued to grow for an alternative solution.  Online wallet services suchas Blockchain.info were maturing and Bitcoiners started to feel safer by storing their bitcoins either offline in paper wallets or with a more specialized, online wallet service.

One of the most important aspects of Bitcoin is the ability to transact without 3rd party risk, but with the exchanges you are now exposed to exactly this risk.  Being able to cash for bitcoin fits very closely with the underlining Bitcoin philosophy and Satoshi Square fills a natural role.

One of the aspects which wasn’t discussed in my interview with Josh Rossi, but I feel that it deserves some attention, is the community aspect of Satoshi Square.  Often times Bitcoin is considered difficult to understand as well as being an exclusive club of hackers, programmers, engineers and other geeks/nerds/dorks.  This couldn’t be further from the truth and having an option to meet in person to not only buy/sell bitcoin but also to interact with each other plays an integral role in the Bitcoin evolution and in the spread of ideas.  If this new technology has the potential utility that many of us understand, then we cannot be exclusive and must continue to look for new ways to educate and include new Bitcoiners which Satoshi Square does. 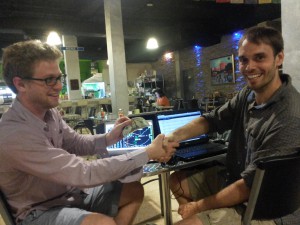 Let’s all recall when you first saw someone send bitcoin; how amazing was it?  Rossi contributes this experience as the “ah ha” moment for new Bitcoiners.  The quick transfer from there phone to yours or perhaps their online wallet to your phone instantly shows the amazingly quick and easy nature of the digital currency.  The unforgettable Blockchain.info beep show cases this with elegance and it seems to good to be true.  Combined with the ability to scan someone’s QR code helps to show people the true power of Bitcoin.

Money has typically been both difficult and expensive to send online and now you’ve just witnessed a new method for transmitting value in a matter of seconds at no cost.  This, my friends, is what hooks new Bitcoiners and Satoshi Square is a great place to demonstrate this awesomeness.  We have the ability to show others how easy Bitcoin is to use, but also help answer newbie questions to slowly lift the fog of confusion which unfortunately still retards growth.  The community aspect of networking and friendship building is often overlooked, but will grow in its importance as more people find comfort in the personal aspect of Satoshi Square and the ability to ask questions to their newly found peers.

Decentralized crypto-currencies have escaped from the magic lamp and the technology is ours to use.  We now live in an amazingly interconnected world where it’s very obvious that money has and will continue to evolve to fill its role in the new digital economy.  Technological progress is a blessing as it helps to move forward humanity, but it can also be a curse and used against us by the Surveillance State.  So it’s up to us, the Bitcoiners of the world, to continue to build, include, educate, develop and create new relationships with each other while using this new amazing technology for the betterment of mankind.  Satoshi Square will continue to play a significant role in this journey and I’ll be glad to sell you a coffee and bagel for bitcoin, amigo.

Everyone is welcome to join each Sunday at noon at the New York Deli and Bagel Café in El Cangrejo.  Needless to say we were both very excited and I have been introduced to many more incredible people because of Satoshi Square.

currently spends his time as a Private Banker for Euro Pacific Bank where he promotes sound money savings accounts, 100% reserve banking and a globalized investment strategy.   Before his banking career, Ashe spent several years working in software support for a company in Raleigh, North Carolina.  Currently residing in Panama City, Panama, he leads a team of developers and technical analysts on various Bitcoin related projects. Send bitcoin Tips to Ashe directly at 1JDheCBTK7A4V5nj3SYaXCcr4zDUey43c3