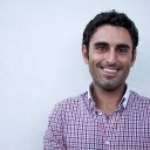 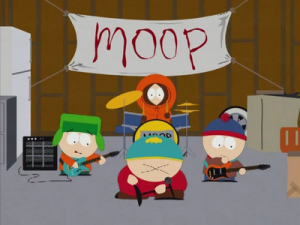 In 2008, South Park commented on how the Internet was not ready to be society's sole distribution center for media. One of the show's main characters, the perpetually 8-year-old Kyle, said at the end of the show, summing up the lesson he learned:

…You know, I learned something today. We thought we could make money on the Internet. But while the Internet is new and exciting for creative people, it hasn’t matured as a distribution mechanism to the extent that one should trade real and immediate opportunities for income for the promise of future online revenue. It will be a few years before digital distribution of media on the Internet can be monetized to an extent that necessitates content producers to forgo their fair value in more traditional media.

But, in the four years since that South Park episode, the way of doing business on the Internet has changed. Digital Currency & The Music Industry As kindred spirits, file sharing and Bitcoin could compliment each other, especially in those industries most affected by the advent of free file-sharing, such as the entertainment industry. Because of the lower startup costs for bands as opposed to, say, film-makers, this article focuses on the recording industry. The method of peer-to-peer file sharing was brought to the mainstream by technologies such as Napster, and then BitTorrent. In their minds, millenials were not first posed with a moral question when they greeted these innovations for the first time, but rather a technological one: “How do I download a song?” The technology was new and arose out of a demand created by the highcosts of recorded music in the pre-Napster days. By comparison, the modern cost of a physical CD has fallen more than 50% at the big box retail outlets such as Target, Best Buy, Wal-Mart, etc. By 2001, Napster had been contaminated due to efforts by music and film interests which saw the vast archives of their material shared online, peer-to-peer and for free, as illegal. In their minds, the labels were no longer needed but to foot the bill for music. Litigation began and by the Summer of 2001, Napster in its original form had been shutdown. In the trial, Napster claimed to have setup an algorithm in the form of computer code which could weed out the majority of copyrighted material. The labels' lawyers did not care, showing their dedication to litigation over innovation. Litigation is an answer of the uncreative. In the case of the music industry, the creative (as the creative often do) failed to establish a new enterprise towards money-making music. In some ways, digital file sharing of the “oughts” was not truly peer-to-peer. Instead, a central distribution company paid for the production of entertainment from various artists (film-makers, musicians, etc.) and then distributed it, namely, to retailers who made most the profit. Napster made it so that, as soon as any individual anywhere in the world had a physical copy of the album, they could upload it and be the album's online distribution wing, without pay for marketing services rendered. Soon, individuals were able to “leak” albums that hadn't ever been released yet. Some saw this as a marketing opportunity, others saw this as theft. No doubt, when the ability to upload and share this music for free on the Internet hit, the world was forever changed, and many musicians these days are so lost in the sea of monetizing music they even ask if it is worth producing albums anymore. The unfortuante reality is that the war on file-sharing by the so-called “copyright cartel” generally debilitated the evolution of networks like Napster, BitTorrent and peer-to-peer file sharing, and I do not mean solely technologically. I mean in the way the technology itself was approached; namely, by the artists and labels themselves. No medium has ever been created whereby artists can reach their audiences in a streamlined and direct manner; that is, in a peer-to-peer manner. Instead of innovate, major record labels (the two largest companies in the industry are Universal Music Group [recording] and Sony/ATV Music [publisher].  Universal Music Group, Sony BMG, EMI Group and Warner Music Group are collectively known as the "Big Four" majors. Labels outside of the Big Four are referred to as independent labels.) have litigated. This miscalculation – valuing litigation over innovation – has cost them. But, there still has been no first-mover into the peer-to-peer record label space. BandCamp has allowed an environment where musicians can upload music to the website, as well as charge for them, but Bandcamp has not had the intention of forming itself as a label for its bands. Instead, it's really a way for a band to share its demos with other labels. Further, Bandcamp has overlooked Bitcoin, which has the potential to transform the music industry, and entertainment industry generally. Bitcoin would allow a decentralized record label (one in which the bands retain control over their catalogues) to manage the financials for itself and all bands at virtually no cost beyond programming. Functioning as an escrow service, a theoretical label could allocate revenue to the bands instantly, taking its cut, while charging for individual “marketing” packages. The bands and label all receive instant payment for their contributions to the website. This is merely one version of how this type of arrangement could work. One thing is for sure, the peer-to-peer of Napster was not the final step in the evolution of the music industry's relationship to online file-sharing. Instead, those with the most capital in the space have failed to adequately re-allocate their resources for a more streamlined approach. Why they avoided the project of a “decentralized record label was simple: the accounting would be monumental and credit cards would make up the vast majority of transactions. Credit cards are not streamlined for the Internet. This no longer stands, to be sure, as decentralized digital currencies make the idea of e-commerce more affordable and streamlined for a business than ever before. Even before Bitcoin, the recording industry's marginal production and distribution costs had gone down thanks to the Internet. Now, because of decentralized digital currencies, those costs could decrease even further. Bitcoin has made a decentralized peer-to-peer record label practical for the first time.