The Beginning or the End of Banking?

Is Bitcoin the beginning or end of banks as we know it? 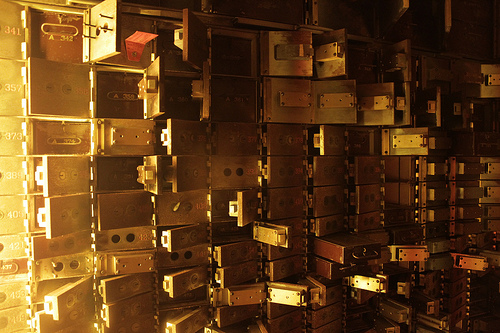 The fundamental effect of Bitcoin is the decentralization of value storage and payment processing, creating a more robust monetary system than existing fiat money systems of the past 100 years. As more individuals and businesses begin to adopt Bitcoin, people are starting to wonder: do we even need banks anymore?

Exploring this question, we must first ask what the major functions of a bank are? Broadly, they fit into three categories*:

Regarding the first key point: Bitcoin obviously cannot store diamonds, precious metals or any other physical thing. However, when it comes to merely storing value, the Bitcoin blockchain does a phenomenal job of preserving and securing control of the Bitcoins to their respective private key owners. In contrast, a safe deposit box requires you to physically be at a location, exposing your identity and restricting the effective control you have with that money. The second role of a bank is to offer title-transfer deposit contracts. This type of contract is by far the most common type of monetary deposit by individuals and businesses. I have referred to it as a ‘title-transfer deposit’ to reveal the nature and perspective these contracts have in law. A frequent critique of the fractional reserve banking system is that it engages in widespread fraud by possessing less monetary funds than it claims to have available on demand for depositors. If you wish to tumble down this much heated rabbit hole, I encourage you to read my small treatise on the subject here. The incentive of the title-transfer deposit contract is that, in addition to outsourcing the storage and security of monetary funds to a centralised party, the deposit can receive a ‘return on investment’ from lending their monetary deposits to the bank. This feature is particularly significant in an inflationary monetary scenario, where unspent and uninvested savings progressively lose exchange value (i.e. purchasing power) as the money supply increases over time (i.e. inflation).

At first glance, a key criticism of Bitcoin is the apparent lack of interest available to participants saving Bitcoins. However, this criticism neglects the deflationary nature of the Bitcoin monetary system. Given a fixed supply of Bitcoin in the long run, and assuming increased adoption, the marginal utility of each Bitcoin will increase over time. In other words, the same nominal quantity of Bitcoin will experience greater purchasing power over time. This concept is generally well understood in the Bitcoin community. The deflationary Bitcoin monetary system rewards savers over time, theoretically negating the necessity to earn interest in an attempt to preserve purchasing power. Of course, the rate of increase in purchasing power is tied to economic factors outside of an individual’s control, which leads to the third and final point: the credit and investment nexus.

Banks use deposited funds (that are legally theirs) to provide credit to individuals and businesses into the local economy. Banks can further partner with individuals and businesses to speculate or invest into ventures of various risk categories. Traditionally, the vast supply of deposits fuel the credit and investment arm of the bank to such an extent that they are central points of fail for the economy. When the bank directs funds to bad loans or unprofitable projects, they risk failing to fulfil their original legal obligation to repay their debt to depositors. If depositor’s money is completely depleted from malinvestments, the bank is ‘bankrupt’ in the absence of liquidity (typically sourced by inflation) provided by other banks or the central bank (the lender of last resort). If this malinvestment happens on an economy-wide scale, triggered by a manipulation of interest rates (as per the Austrian theory of the business cycle), this is referred to as a business cycle. How does this change in the Bitcoin era?

The answer is complicated and dependent on the level of adoption in the economy versus government fiat money. Assuming a 100% Bitcoin economy, the business cycle is infinitely more difficult to trigger. Firstly, the money supply cannot be centrally manipulated as it is cryptographically and programmatically protected in the Bitcoin network. Even if central monetary planners desired to increase the supply of Bitcoins in the economy, they could not supply any liquidity beyond what is in their control**. Secondly, as ‘deposits’ in the Bitcoin monetary system are decentralised, so is nexus of credit and investment in the economy. It is reasonable to assume that in a 100% Bitcoin economy, institutions reminiscent of banks exist to function as an intermediaries to offer credit and investment financial instruments, matching available funds to opportunities of various risk categories. These institutions aim to offer returns greater than the deflationary increases in purchasing power of Bitcoins over a certain period of time. Specifically, the credit and investment instruments aim to achieve nominal gains in Bitcoins in addition to purchasing power gains. Finally, any attempts at a fractional reserve banking system using Bitcoins is subject to greater levels of transparency than any banking system in history. The blockchain can be audited by anyone at anytime to determine whether the bank has depleted reserves. While it may make banks more susceptible to bank runs, it also prevents an escalating and far-reaching malinvestment ‘financial tumor’ from developing in the economy.

Fundamentally, there is no incentive to surrender individual control of Bitcoins to an institution that can offer no more security than an open source, user friendly application. This fact alone threatens to disrupt an ancient pillar of the banking system. As Bitcoin adoption grows and decentralizes the control and flow of money in the economy, I personally expect that banks will evolve into institutions focusing on marketing credit and investment financial instruments to individuals and businesses. The overall effect of the transition into the Bitcoin monetary system is the development of a market economy with greater resistance to business cycles. ---------

*I have purposely left-out the role of sending money securely over long distances. Bitcoin is self-evidently superior to banks in this regard. ** In reality banks are the major engines of inflation, literally lending money into existence and seeking reserve requirements (typically 10%) after a loan has been approved. If present deposits aren’t sufficient to make up the reserve requirements, banks will borrow from other banks or the central bank at a discounted interest rate, provided that arbitrage is in their favor.