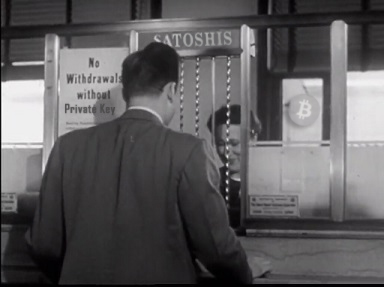 Source: Internet Archive, "Using the Bank" (1947)[/caption] Thanksgiving day, while many of us were eating turkey, The United States Patent and Trademark Office (USPTO) published JPMorgan Chase’s (Chase) patent application 20130317984, “Method and system for processing internet payments using the electronic funds transfer network.”  The application was filed with the USPTO on August 5th, 2013. Without mentioning Bitcoin or cryptocurrencies at all for that matter, Chase appears to be building a competing centralized network to Bitcoin.  The application defines the problems that legacy banking has with online transactions and then provides a detailed explanation how Chase will address these problems with this new technology.  The application states that Chase’s technology is a “new paradigm.”  Moreover that it permits the creation of “virtual cash” (also referred to as “web cash") with a “real-time digital exchange of value.” I will start with extracting the problems that Chase identified which are strikingly similar to those addressed by the revolutionary Bitcoin payment protocol.   Bitcoin has been singled out as a game changer when it comes to the legacy cost of wire transfers:

“...to date, there is no efficient way for consumers to make payments to other consumers using the Internet. All traditional forms of person-to-person exchange include the physical exchange of cash or checks rather than a real-time digital exchange of value. In addition, the high cost of retail wire transfers (i.e., Western Union) is cost prohibitive to a significant portion of society…”

Bitcoin has been hailed as frictionless:

“...Two significant drawbacks with ...Internet POS payments are that: 1) a pre-existing relationship between the consumer and the merchant must exist; and 2) the consumer is required to provide the merchant with his or her account and/or PIN. The first drawback of some of the above models cannot be practically overcome as it is impossible for a consumer to have pre-existing relationships with all of the potential merchants conducting business on the Internet….”

Bitcoin has also been ballyhooed for it use with micro-payments and payments under ten dollars due to its zero to negligible fee structure:

No Stranger to Bitcoin Chase took a swipe (pun intended) at Bitcoin by specifically not mentioning it in the patent application:

“...It is predicted that credit cards will be the dominant on-line point of sale (POS) payment choice for at least the next five years. While new Internet payment mechanisms have been rapidly emerging {Brian’s note: cough...cough...Bitcoin}, consumers and merchants have been happily conducting a growing volume of commerce using basic credit card functionality. None of the emerging efforts to date have gotten more than a toehold in the market place and momentum continues to build in favor of credit cards...”

However, Chase is no stranger to Bitcoin.  Chase critic and Bitcoin pundit Max Keiser has been quite outspoken about his dislike for the legacy institution.  Kashmir Hill of Forbes also wrote how Chase bank effectively shuttered the once high flying Bitcoin player Bitinstant in “Bitcoin Companies and Entrepreneurs Can't Get Bank Accounts:”

“{I}n Hong Kong in April, {BitInstant CEO Charlie} Schrem got notice from Chase that Bitinstant’s account was being suspended immediately…”

Bitcoin causing Friction For a currency that has been lauded for its frictionless characteristics, Bitcoin sure has been causing a lot a friction over at the legacy banking institutions.   Chase noted in the patent the high cost of Western Union.  Over at Bitcoin Magazine we broke the story “Western Union Says Bitcoin Not Ready For Primetime.”  Western Union has since pulled the the presentation referenced in the story from their website and have distanced themselves from the cryptocurrency.  Bitcoin statistics website Coinometrics recently revealed that Bitcoin has surpassed Western Union in volume and it appears to be catching up with other payment networks.  Finally, Bank of America just surprised everyone by releasing a report "Bitcoin: a first assessment," initiating coverage of the cryptocurrency and noting that "BTC surpasses Western Union in market capitalization." Chase is also the largest bank member of the Federal Reserve system (Reference Charter: NAT - Nationally chartered member bank).  Said another way, the Federal Reserve has oversight of Chase.  The The Federal Reserve Bank of Chicago recently released Chicago Fed Letter: Bitcoin a Primer.  And outgoing Fed Chairman Ben Bernanke recently wrote to the U.S. Senate who held hearings on virtual currencies that:

"...In general, the Federal Reserve would only have authority to regulate a virtual currency product if it is issued by, or cleared or settled through, a banking organization that we supervise…”

and further stated that:

Recently over at my Blog on Medium, I discussed how MasterCard created a tab based system (think “bar tab”, not “browser tab”) for micro-payments and payments under ten dollars.  Through Mastercard Labs’, Mastercard filed for patent application 20130297485, “Crowd-Sourced Credit Rating and Debt Tracking System to Facilitate Small Purchases on Trust Based Credit:”

How It Works Under The Hood: Internet Pay Anyone “...The structural components to the system of the present invention include: “...The Payment Portal Processor (PPP) is a software application that augments any Internet browser with e-commerce capability. The PPP software sits in front of and provides a secure portal for accessing (finking to) the user's. Demand Deposit Accounts (DDA) and IPA accounts. The PPP enables the user to push electronic credits from its DDA and IPA accounts to any other accounts through the EFT network…” “...The {technology} ...includes freely publishing the payment address and making it available to users of an internet portal or search engine…” “...Currently, all Internet transactions use "pull" technology in which a merchant must receive the consumer's account number (and in some cases PIN number) in order to complete a payment. The payment methods of the present invention conversely use "push" technology in which users (consumers or businesses) push an EFT credit from their IPA or DDA accounts to a merchant's account, without having to provide their own sensitive account information…”   A New Paradigm

“...The present invention represents a new paradigm for effectuating electronic payments that leverages existing platforms, conventional payment infrastructures and currently available web-based technology to enable e-commerce in both the virtual and physical marketplace. The concept provides a safe, sound, and secure method that allows users (consumers) to shop on the Internet, pay bills, and pay anyone virtually anywhere, all without the consumer having to share account number information with the payee. Merchants receive immediate payment confirmation through the Electronic Funds Transfer (EFT) network so they can ship their product with confidence that the payment has already been received. The present invention further enables small dollar financial transactions, allows for the creation of "web cash" as well as provides facilities for customer service and record-keeping...”

“...only debit related transactions are currently initiated on the EFT system. The EFT credit message of the present invention thus represent a significant advancement in art which has no peers with respect to electronic commerce…”

Pay Anyone without Traditional Legacy Fees

“... providing the ability for anyone with an account at an institution to transfer funds to anyone else who also has an account at the same or a different institution. The pay anyone feature of the present invention allows parties to electronically transmit funds instantaneously without the expense of today's wiring fees...” Eliminates Chargebacks and Significantly Reduces Costs “...For the merchant, the present invention significantly reduces the transactional cost as compared to the use of credit cards. The method also provides a reduction in fraud and credit losses, while the finality of the transaction virtually eliminates dispute and chargeback processing from the viewpoint of the financial institution. For financial institutions, the present invention all but eliminates the potential of fraud that is inherent with credit card transactions. As consumers are typically only responsible for the first $50 of fraudulent transactions, banks typically absorb the sometimes significant costs associated with fraud. The ability for hackers to steal consumer's account numbers (e.g., credit card numbers) from an Internet merchant is completely eliminated since the merchant never receives such information…”

“...The majority of the prior art electronic Wallets on the Internet today are primarily used as a convenience vehicle, merely providing a method of storing account number information and other form filling functions (e.g., shipping addresses). In contrast to traditional Wallets, the PPP enhanced Wallet of the present invention is associated with one or more DDA and/or IPA accounts. The PPP thus provides the user with a form of virtual cash that is secure and guaranteed. The PPP further contains a receipt feature and archive feature that maintains a transaction history of all payment activity with respect to accounts linked to the PPP…” “The Payment Portal Processor provides the user with a form of virtual cash that is secure and guaranteed.” It Has Backbone The IPA Technology has been in development since at least the year 2000 when 6,609,113 “Method and system for processing internet payments using the electronic funds transfer network” was filed (and subsequently granted) by the USPTO. The Chase is On I view this technology and patent application as an overwhelming good thing.  Bitcoin is driving Innovation.  It has been said that credit cards and the legacy banking system in use today was never meant for use over the internet.  Chase’s updated Internet Pay Anyone technology appears to come head to head with Bitcoin.  I previously discussed at eCommerceBytes in “How PayPal Almost Liberated Cyprus” how PayPal was the precursor to Bitcoin.  While it remains to be seen if this technology is a “Bitcoin Killer,” other players such as eBay/PayPal (which have been riding under Bitcoin’s coattails through marketing gimmicks) ought to pay close attention to this emerging technology.  If Bitcoin does get a “toehold” in the marketplace, we just might see this technology activated.  The Chase is on.