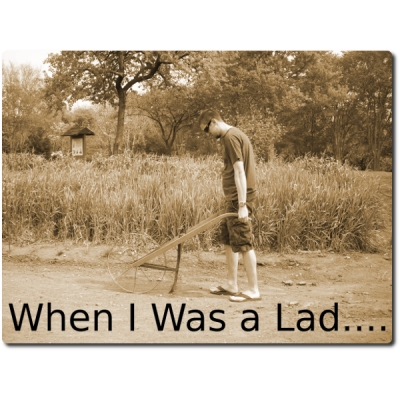 You Were Lucky! When I Was a Lad

As a boy, I was fortunate to live within walking distance of my grandparents' home and can clearly remember sitting with my grandfather discussing his first computer experience. He worked for a tractor building company, Massey Ferguson, which purchased a computer for accounting. He recalled, "It took up almost an entire room and used punched paper cards to load programs."

He was recanting this story because I myself had just received my first computer, a Commodore 64, and I was only interested in playing games such as Jumpman and Golden Axe! This particular story stood out because my grandfather's other stories all involved items that were cheaper in times past. The majority his stories were very much like the Monty Python 4 Yorkshiremen Sketch:

When I was a lad a newspaper only cost a penny and a bottle of real coke was only a shilling!

The story of this huge early computer carried with it an equally huge price tag. Apparently this early computer cost more than my grandparents' first home! The Commodore 64 that my parents bought me for Christmas was expensive at the time but probably only a week of pay for my Dad.

Fast forward to present day and it feels like a generational shift in story telling is about to occur. I've already had conversations with my kids about tales of the first Bitcoin transaction where Laszlo Hanyecz paid 10,000 bitcoins for two pizzas!

It truly feels like a shift has occurred, technology products such as computers, flat screen televisions, and the latest smart phone used to be among the few products that grew cheaper over time. But now Bitcoin has introduced deflationary pressure to the almost limitless set of items that can be purchased with bitcoin.

I've heard many people talk about how owning Bitcoin has made them more frugal and more inclined to save their cryptocurrency. Part of that might be the transacational friction of sweeping private keys from a paper wallet, or entering a twelve-word passphrase to withdraw funds, but I think deep down many of us believe that Bitcoin and many other altcoins will rise in value. We can see the true value of the technology and the social change it can bring.

In summary I'm excited to see a future where I can talk to my grand children and have the following conversations:

Grand Kids: Grandpa, don't be silly, everyone knows you can get two pizzas and a coke for 10 Satoshis or just buy 'em using PizzaCoin!

Many thanks for reading. I would like to wish everyone out there Merry Crypto Holidays and look forward to seeing where this amazing technology takes us in 2015!