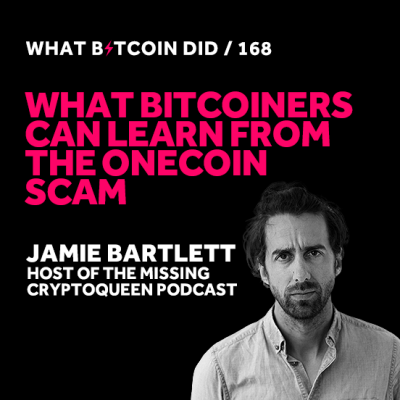 “People who invest heavily in something, put all their money and their hopes into it. It’s very hard for them to leave because they have to accept that all that was a waste, that they’ve been duped, that they’ve been tricked and they tricked other people.” — Jamie Bartlett

OneCoin, a project founded by Ruja Ignatova, promised a financial revolution. By the time Ignatova disappeared, the scam was alleged to have received over $5bn in investment (though some estimates may put it at over $15bn).

While OneCoin claimed to be running a private blockchain, in reality, it was a Ponzi scheme where buyers purchased 'packages' and received 'educational material'. During the process, they earned OneCoin tokens, and there were incentive schemes to onboard new users.

Once people had received their OneCoins, the only place they could trade them was with another OneCoin user on the scheme's private 'exchange'. While the scam began to unravel with the disappearance of Ruja and the arrest of her brother, many struggled to accept it was a scam and money continued to pour in.

The word scam is thrown around loosely in crypto, often from cult-like followers who disagree with an ideology that another coin possesses or sometimes due to a lack of knowledge. While some projects may be misguided or have questionable use-cases, not all are scams like OneCoin Bitconnect and PlusToken.

Experienced investors see these projects and immediately identify the warning signs; sadly, this is not necessarily the case for newcomers. The language used in Bitcoin and crypto can be confusing, and when regular people hear or read about a project that is 'The New Bitcoin' with promises the project is like buying Bitcoin at $1, $10 or $100, these scams can quickly suck in naive investors.

So, should Bitcoiners be doing more to spread awareness of these scams as they arise and what can Bitcoiners learn about guiding new investors from scams such as this?

In this interview, I talk to Jamie Bartlett, host of the BBC's podcast The Missing Cryptoqueen, an investigation into OneCoin and the disappearance of its founder Ruja Ignatova. We discuss scams, Ponzi's, pyramids, cults and multi-level marketing.