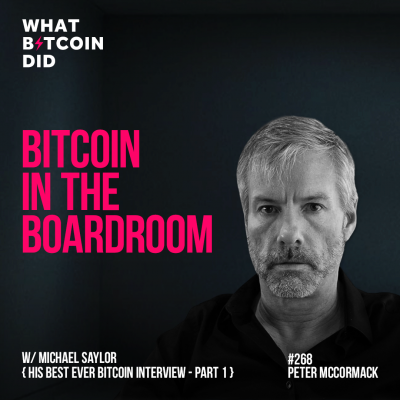 What Bitcoin Did - Bitcoin in the Boardroom with Michael Saylor - WBD268

In August, MicroStrategy made the bold move of purchasing 21,454 Bitcoin to add to their treasury, spending $250 million. In doing so, CEO Michael Saylor stated that he views Bitcoin as a "dependable store of value and an attractive investment asset with more long-term appreciation potential than holding cash".

The next month MicroStrategy announced that they had doubled down on their conviction in Bitcoin and acquired an additional 16,796 Bitcoin, taking their total spend to $425 million. This move sent a clear message to businesses everywhere that Bitcoin is a valuable asset and can be a key part of a company's treasury.

Following in the footsteps of MicroStrategy, last week Square announced that they too had added Bitcoin to their treasury with the purchase of 4,709 Bitcoin for ~$50 million.

In this interview, I talk to Michael Saylor, the CEO of MicroStrategy. We discuss their Bitcoin purchase, where his conviction in Bitcoin came from, Square buying Bitcoin and the process of adding Bitcoin to a public companies treasury.