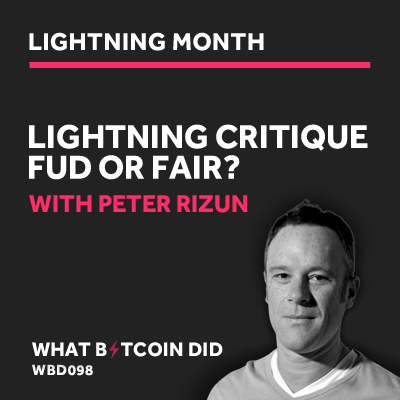 What Bitcoin Did #98 Lightning Critique: FUD or Fair? with Peter Rizun

“Bitcoin is a peer to peer electronic cash system, and the main design goal is to allow me to send money to you without going through any intermediaries. ” — Peter Rizun

The scaling war pitched two ideologies for the future of Bitcoin against each other. One side believes that Bitcoin can scale on-chain with larger block sizes while the other side believes that the base layer should be kept small with payments scaled off-chain, using second layer technologies such as the Lightning Network.

Peter Rizun is firmly in the large block camp, and while there are questions over his previous thoughts and work, he is technical, and he offers a harsh eye over the Lightning Network. Yes, Peter’s approach has a bias, he wants the Lightning Network to fail to support his vision of larger blocks, but does this make his claims invalid?

In this interview, we discuss why Peter supports on-chain scaling and his Five Fundamental Flaws of The Lightning Network, including issues such as how small payments are not trustless and how high layer 1 fees impact layer 2.

Are his criticisms FUD or fair?