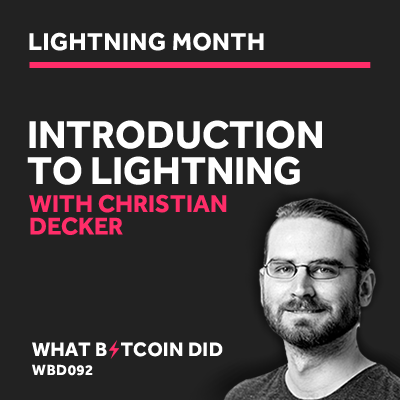 “Lightning is a mechanism for us to make Bitcoin more useful, make it available to more people and extend Bitcoin’s reach into more use cases.” — Christian Decker

The Lightning Network is designed to solve the scaling issues with Bitcoin. As a second layer technology, it enables fast and near instant payments using payment channels, something which has been discussed since when Satoshi was still involved in the project.

Christian attempted to solve the scaling problem with his whitepaper, A Fast and Scalable Payment Network with Bitcoin Duplex Micropayment Channels, but before its release, Justin Poon and Thaddeus Dryja released a competitor whitepaper, The Bitcoin Lightning Network: Scalable Off-Chain Instant Payments.

Ultimately The Lightning Network is mostly based on Justin and Thaddeus’ work, but Christian has been a key contributor and is working on Blockstream’s implementation C-Lightning.

In this interview, we discuss the competing whitepapers, how the various teams collaborate on Lightning, how payment channels work and upcoming dev projects.