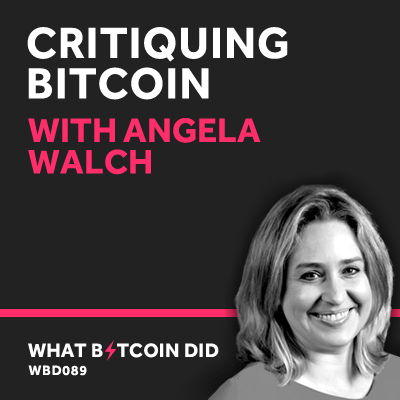 What Bitcoin Did #89 Critiquing Bitcoin with Angela Walch

“I’m worried that policy makers are getting a single perspective on the technology, its capabilities, its risk, I think they need to be getting a more critical perspective as well.” — Angela Walch

Bitcoin is defined as decentralised, a critical feature which stops any individual or group control or destroy it, but a closer look at decentralisation opens many questions of how decentralised it is. Do pockets of power exist in Bitcoin? Are lead maintainers a centralised pocket of power? Is this dangerous?

As people push to build products that integrate Bitcoin with the legacy financial system, Angela Walch has raised key concerns as to the implications for this, believing that The SEC is not paying attention to the aspects of Bitcoin where it could be argued as centralised.

In this interview we discuss her paper, Deconstructing 'Decentralization', pockets of power within Bitcoin, the risks of integrating Bitcoin with the legacy financial system and conflicts of interest.