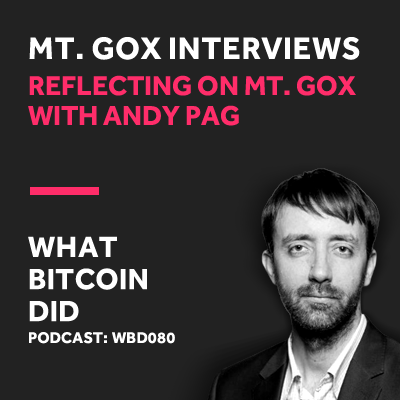 What Bitcoin Did #80 Reflecting on Mt. Gox with Andy Pag

“It is a lot of money that could have some pretty dramatic effects on a lot of peoples lives. It would be a really lovely story to see that delivered and to see people get these windfalls that they have been waiting for, for a long time.” — Andy Pag

The Mt. Gox story is incredibly complicated. The first Bitcoin exchange, created at a time when people would buy Bitcoin through eBay or forum discussions, and payment was sent with trust. When it launched it, Bitcoin was trading at $0.06, and within six months Jed McCaleb had passed it onto Mark Karpelès.

Three years after the sale the exchange collapsed when a suspected 850,000 Bitcoins were stolen. Since then the story has unravelled but remains complex, both in finding the truth and resolving what should happen to the remaining Bitcoin.

From the Jed to Mark and what happened with the sale and handover; with Coinlab and Brock Pierce’s claims; with the creditors, the lawyers and the Japanese legal system, finding the truth of what happened and what should happen is highly complex.

In this final interview in my series covering Mt. Gox, I talk to the journalist, Mt. Gox creditor and the creator and elected administrator of Mt. Gox Legal, Andy Pag. We reflect on my interviews and discuss the parties involved, the history of what happened between Jed and Mark, the claims by CoinLab and Brock Pierce and how this may all be resolved.