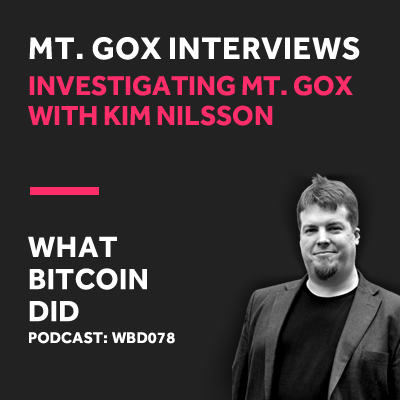 What Bitcoin Did #78 Kim Nilsson on His Investigation Into Mt. Gox

“We expect more from this position, that is why we usually put people in these elevated positions, to be able to make the right decisions and Mark kind of ended up there more by accident.” — Kim Nilsson

Mark Karpeles has had many accusations thrown at him since the collapse of Mt. Gox, including being the architect of the theft himself. Many people were angry with him at the time, and many still are, but as more information surfaces about the history of the exchange, a different picture has emerged.

Indeed, Mark made mistakes which cost users of the website hundreds of millions of dollars. But is everything attributable to him? Kim Nilsson’s investigation into the chain of events surrounding the collapse of Mt. Gox highlights that Mark likely inherited an insolvent exchange and was unable to cope with the challenges of a rapidly expanding business under constant attack.

In this interview, I talk to Kim about his report, his opinions on the numerous hacks during the history of Mt. Gox and his views on Mark, Jed McCaleb, Brock Pierce and Peter Vessenes.