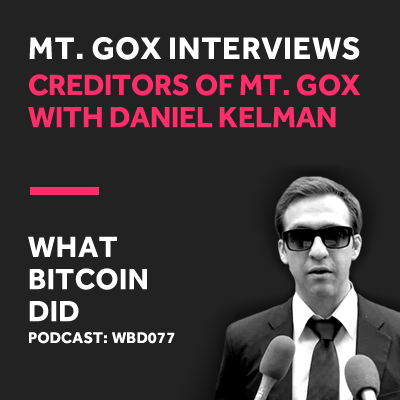 What Bitcoin Did #77 Daniel Kelman on the Creditors of Mt. Gox and Civil Rehabilitation

“When this all happened I hated Mark, but now I don’t because I understand a lot more about what went on.” — Daniel Kelman

The victims of Mt. Gox are the creditors, those who lost their Bitcoin when the company entered into bankruptcy arrangements. For years they have battled for a fair civil rehabilitation plan and suffered delay after delay.

Under Japanese law, the creditors were due the Yen value off their holding at the date of bankruptcy, to be paid out from the 200,000 Bitcoins which were found by Mark Karpeles after first suspecting all the Bitcoin were gone.

The process of rehabilitation has been held up by the lawsuit from Peter Vessenes from Coinlab, and during the wait, the price of Bitcoin has risen sharply. Under Japanese law, after creditors have been paid, the remaining value in the company is due to the shareholders, this being Mark Karpeles (88%) and Jed McCaleb (12%), which would have made Mark a billionaire.

To their credit, neither Mark nor Jed wants to receive this money, and the creditors have fought to have the remaining Bitcoin redistributed to them. In this interview, I walk with the lawyer, Daniel Kelman, the architect of the civil rehabilitation plan for Mt.Gox creditors. We discuss this as well as the claims from Brock Pierce and Peter Vessenes.