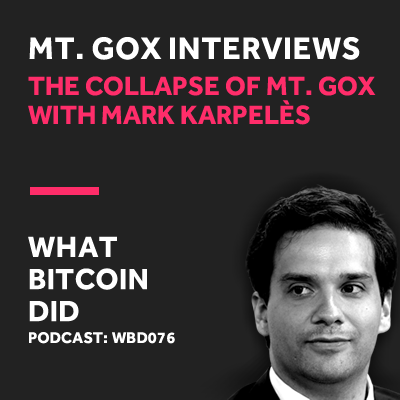 What Bitcoin Did #76 Mark Karpelès on the Collapse of Mt. Gox

“I am very sorry about the way things went; I wish I could go back and fix things. There is only so much I can do so I just continue helping and making sure people get as much as help as they can.” — Mark Karpelès

The shadow of Mt. Gox still hangs over Bitcoin some five years after it collapsed. At the time it held 7% of all Bitcoin in circulation and was the primary exchange for Bitcoin traders. It was reported that 850,000 Bitcoins had been stolen, of which 750,000 were customer coins and 100,000 were owned by Mt. Gox, though 200,000 were later found.

In the five years since, more and more information, research and analysis has pointed at a chaotic operation with poor security procedures, yet opinions range. Some label Mark anything from incompetent to a straight up fraudster while others sympathise with the challenges faced by running the worlds first Bitcoin exchange.

In this interview, I talk to Mark about the collapse of Mt. Gox, how he acquired it from Jed McCaleb, the process of civil rehabilitation and how Brock Pierce and Coinlab are holding up the distribution of funds to the creditors.