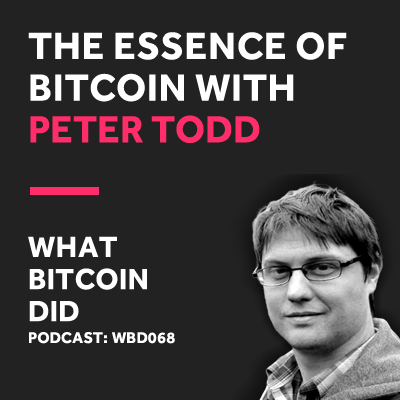 What Bitcoin Did #68 The Essence of Bitcoin With Peter Todd

“Anyone who understands economics and finance and how markets work will be a maximalist because it is more efficient to have one currency than a bunch of ones.”

There were many attempts at creating a digital currency before Bitcoin, all failing for different reasons. Bitcoin brought together a number of ideas to solve the double spending which has enabled it to flourish for over a decade.

Peter Todd is one of a select few who can think about and understand Bitcoin at such a level that they can hold influence over ideas for its evolution.

I managed to get the chance to sit down with Peter at Tone Vays Unconfiscatable conference in Las Vegas and discuss the history of Bitcoin, why it worked when other digital currencies failed. We also discuss other relevant topics in the world of Bitcoin including scaling, Lightning and Fungibility but we also consider why other projects are scams and should not be trusted.