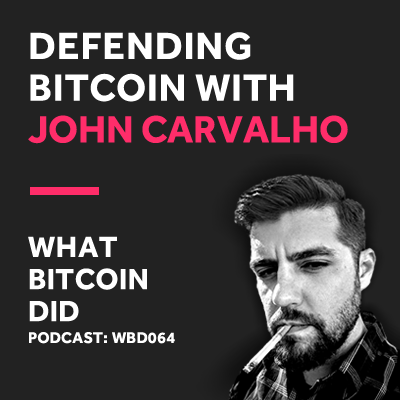 What Bitcoin Did #64 Defending Bitcoin With John Carvalho

“Shitcoins are called shitcoins because they are shit compared to Bitcoin.”

The Bitcoin protocol is now over 10 years old and in that time Bitcoin has been attacked on numerous fronts:

The success of Bitcoin for early investors has triggered the greed in others to attempt to replicate its success or find a use for the blockchain. Also, the inherent features of Bitcoin such as censorship resistance and pseudo-anonymity are a perceived threat to governments.

Bitcoin’s survival is in part down to the dedicated army of those who feel a need to defend it, whether it is developers conscious efforts to ensure the protocol is free from bugs to voices who stand up and fight when individuals and groups try and exert too much control over the future of Bitcoin.

One such person is John Carvalho, an often harsh voice in the world of Bitcoin. During the scaling debate, John was a regular on the mailing list discussions standing up for Bitcoin and pointing out the wrongs of those attempting to take control of the protocol.

In this interview, I discuss with John why he feels the need to defend Bitcoin, the different types of attacks and why most people should not be trading.