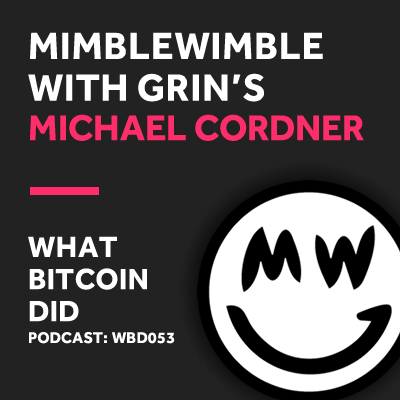 “There may be a few people who genuinely think a deflationary currency is the way to go, nobody on the Grin team does.”

Outside of the most hardcore Bitcoin maximalists, there are some who respect a minimal number of alternative cryptocurrency projects. My experience in creating this podcast is that you find some who say they are maximalists, but Monero is cool, or that Decred is interesting.

The ability to command respect is usually steeped in a currencies foundation sharing characteristics of Bitcoin:

One such project which has sparked interest is Grin’s implementation of Mimblewimble, a new coin which attempts to solve some of the privacy and scaling issues of Bitcoin.

On August 2nd, 2016, Tom Elvis Jedusor, a contributor to the Bitcoin Wizards IRC channel dropped his whitepaper, describing a blockchain with a radically different approach to transaction construction from Bitcoin. In October 2016, Andrew Poelstra from Blockstream completed his analysis of the whitepaper and dropped a position paper filling in some of the gaps from the original paper to make precise the idea.

In the middle of November, Ignotus Peverell, another anonymous developer, appeared on the same IRC channel with a link to GitHub with an implementation of Mimblewimble, and this is how Grin was born.

Fast forward to today and Grin has launched its fourth testnet and is preparing to launch its mainnet in January of next year.

In this interview I talk with Michael Cordner, aka Yeastplume, a developer working on the Grin implementation of Mumblewimble, we discuss why Grin is acceptable for some Bitcoiners, their approach to monetary policy and governance, and how to mine Grin.