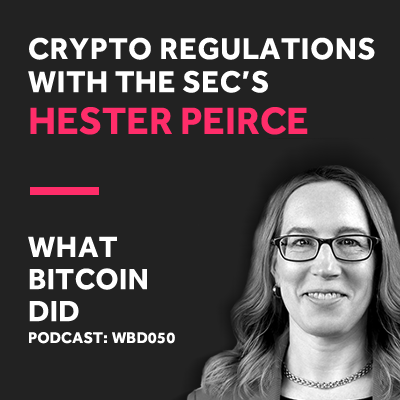 What Bitcoin Did #50 Crypto Regulations With The SEC's Hester Peirce

“Just because you are calling something Crypto does not mean you can ignore the rules we have had in place for years, but I do think we also need to be willing to open the doors a little bit wider for innovation.”

While the SEC initially took a hands-off approach to cryptocurrencies, they have been increasingly providing guidance as to how they view the different parts of the crypto space. From enforcement action against ICOs which are deemed unregistered securities to ruling on proposed rule changes to allow the trade of Bitcoin ETPs, it is becoming clearer that just because a project is a cryptocurrency, it can’t sidestep the rules which have been in place for decades.

The Commission has yet to approve any ETP, so far, rejecting every application. Commissioner Peirce, a vocal proponent of supporting innovation, dissented after the SEC disapproved the proposed rule change to list and trade shares of the Winklevoss Bitcoin Trust on Bats BZX Exchange, Inc.

“I reject the role of gatekeeper of innovation—a role very different from (and, indeed, inconsistent with) our mission of protecting investors, fostering capital formation, and facilitating fair, orderly, and efficient markets. Accordingly, I dissent.”

I was invited by Hester to visit the SEC, and we discussed the role of the Commission, how they make decisions and why she dissented.