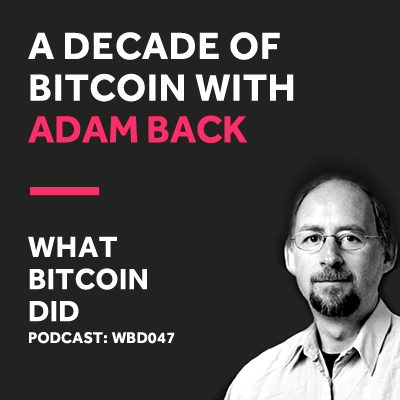 What Bitcoin Did #47 Adam Back on a Decade of Bitcoin

“There are only going to be 21 million coins, there are billions of people in the world, some reasonable percentage of who might find it interesting to own a piece of Bitcoin.”

The Bitcoin whitepaper has eight references for eight projects and technologies which enabled and inspired Satoshi Nakamoto to create Bitcoin. One of those references is for Adam Back’s Hashcash, a proof-of-work email anti-spam tool.

Adam’s credentials as an early Bitcoiner are second to none. Not only is he cited in the whitepaper but his contributions to the early discussions around the development of the protocol are documented at the Nakamoto Institute.

Adam is now CEO of Blockstream, a leading developer of Bitcoin technologies. From sidechains to Lightning to their satellite network, Blockstream building out the commercial infrastructure to take Bitcoin to every corner of the earth.

In this interview, Adam reflects on a decade of Bitcoin with me, comparing and contrasting the early days of with now and explains to me why the whitepaper was different from previous attempts at digital cash. We also discuss the launch of liquid, how sidechains work and what is coming up for Blockstream.