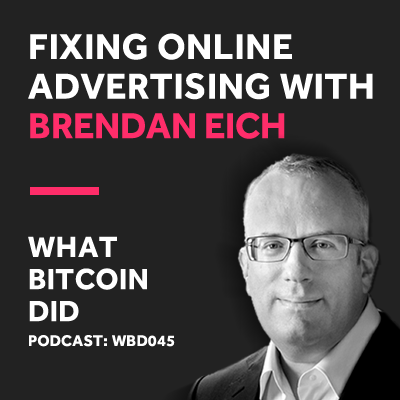 What Bitcoin Did #45 Fixing Online Advertising With Brendan Eich

The online advertising model is broken all parties are hurting:

Publishers are losing revenue to fraud, and ad blockers are reducing the reach of campaigns

Advertisers lack good information on who they are advertising to, and their ads are appearing on fake websites

Brave is attempting to fix this, but not without controversy. Brave is growing as users are increasingly demanding greater online privacy and the tools which Brave uses to block scripts and ads is improving the experience for users, but this, in turn, is causing problems for advertisers and publishers.

Brave is attempting to change the model by changing the relationship between the three parties, ensuring that only ads that real people see on real sites are paid for, and providing a better distribution of income. The controversy comes with the Basic Attention Token, which Bitcoin maximalists have regularly criticized, both for the ICO issuance process and whether the token has any value for users.

Brave faces an uphill task in convincing people to use the token which arguably adds friction for all parties. In this interview, I talk with CEO and President of Brave, Brendan Eich about his rich history in tech, why he built the Brave browser and some of the controversies around the token.