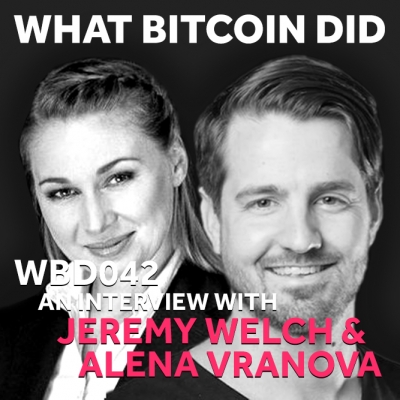 What Bitcoin Did #42 Crypto Custody With Jeremy Welch & Alena Vranova

“Bitcoin does form the dominant position, it has the most hash power, it is the currency in terms of design, decentralisation, or ability for governments or corporate actors to control it, it is the strongest, therefor everything relies on Bitcoin’s survival.”

As the value of Bitcoin and Cryptocurrencies increase, custody has become an increasingly important and sophisticated part of self-sovereignty. The freedom and ease at which cryptocurrencies can be transferred also makes them a honeypot for hackers, coupled with immutable records, there is little recourse should your funds be stolen.

People hold their cryptocurrencies in a variety of wallets, from paper to hardware but these still expose vulnerabilities. From lost seed phrases to personal attacks, there is a demand in the market for more sophisticated custody solutions, and Casa is leading the way in developing the space.

With their central three-of-five management solution, Casa has targeted those with significant portfolios, but with the release of their Bitcoin full node and lightning node they are opening up options to more customers.

In this interview, I talk with Casa founder, Jeremy Welch and strategy lead, Alena Vranova (previously Trezor) about how the Casa solution works, the challenges of managing custody and why design is central to everything they do.