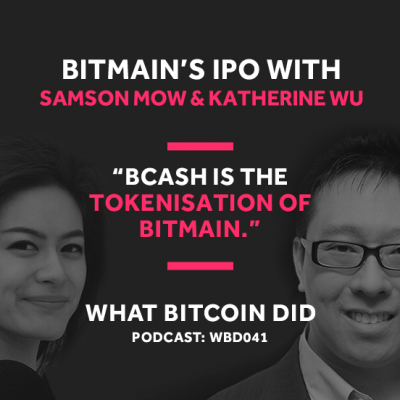 What Bitcoin Did #41 Bitmain's IPO With Samson Mow & Katherine Wu

“I think that they don’t want to IPO right now, but they have no choice because they raised with the expectation that they would IPO, so they had to file and it had to look good, or as good as they could make it look.”

The Bitmain IPO was to be the largest in history. Riding the 2017 bull run, Bitmain delivered staggering growth numbers with $billions in revenue and profit, but the bear market crash of 2018 has exposed fragilities in the business and raised many concerns with operations and strategy.

Coindesk reported this week that investors received false information around the most recent funding round, this alongside the significant questions surrounding the balance sheet, faltering innovation and the decision to support and prop up the price of Bitcoin Cash is casting a shadow over the IPO.

In this interview, I discuss the IPO and the state of Bitmain with Blockstream’s Samson Mow and Messari’s Katherine Wu.