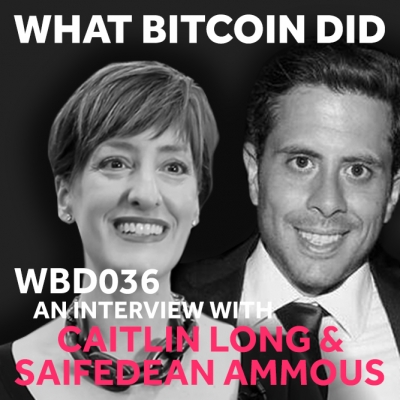 What Bitcoin Did #36 An Interview with Caitlin Long & Saifedean Ammous

“Negative interest rates are purely a construct of the artificiality of the monetary system. There is going to a major bond crash - the challenge is that this could be years if not decades away, or it could be tomorrow.”

“What is going to be interesting in the next crisis is whether Bitcoin behaves as a speculative asset. Will people exit it towards more safer, more liquid assets like the Dollar or gold, or whether it is going to behave more like safe haven asset itself, and people will be exiting other things, particularly the altcoins for the relative safety and liquidity of Bitcoin.”

Following the 2008 market crash, analysts are highlighting new risks for the global economy with rising government debt presenting a risk of a bond crash. The last 12 months have also seen a fall in the value of the local currency in countries such as Iran, Turkey and Venezuela. Data from Local Bitcoin’s highlights that in failing economies, Bitcoin is often seen as a safe haven.

Bitcoin is playing an increasingly important role in the global economy with regulators and Wall Street coming to the table.

In this episode, I talk with the author of The Bitcoin Standard, Saifedean Ammous and Wall Street veteran, Caitlin Long. We discuss: