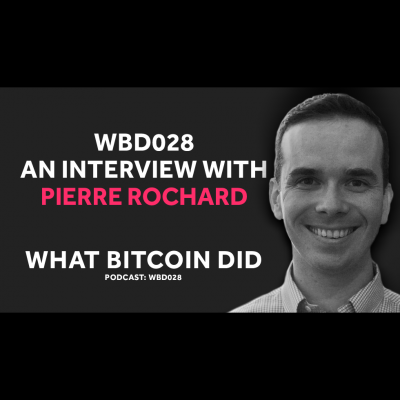 What Bitcoin Did #28 An Interview with Pierre Rochard

“Based on our understanding of monerary economics, the outcome will be such that most of the value will accrue to one coin and one coin will at the very least be the world reserve currency, and even more than that, the one global money.”

In December 2016, I opened a Coinbase account to buy Bitcoin. It was a straightforward process: Google "buy Bitcoin", click on Coinbase link, register an account, deposit from the bank and buy. What I was not prepared for was the option to buy Etheruem too. I had never heard of it and had no idea what it was, but whatever, it was only $9 so I bought some of it too.

I had no bias; Bitcoin was something I had been aware of for years, though not on any deep economic or political level. Ethereum for me was another Bitcoin, but a cheaper Bitcoin, probably something many new entrants to Crypto feel at first. I didn't know about decentralisation, why it is important or the differences between the two coins, I just bought them without thinking too much about it. I didn't stop there, I bought Monero, Dash, Augur, Ripple and so on, endless other coins, endless other opportunities to make money.

Over time, I have found myself researching and trying to understand the business and use cases for each coin while becoming more aware of a group of Bitcoiners, known as maximalists, who have a significant disregard for any Crypto outside of Bitcoin. Having spent too much time arguing on Twitter and increasingly finding myself blocked by some of these people, I decided to spend more time understanding maximalism, what it is I am missing, why are this group of people so anti altcoins.

I have been reading Saifedean's book, The Bitcoin Standard and I binged on all episodes of the Noded Bitcoin Podcast by Pierre Rochard. This content, along with the bear market asking serious questions with regards to altcoin use cases has pushed me closer to understanding maximalism.

Am I a convert? No. My intention is always to keep an open mind and watch the market develop. I also believe that altcoins and tokens have a net benefit to Bitcoin and likely there will be some projects which find a place in the ecosystem. I do though understand there will only be one winner with regards to a digital store of value, and the most likely candidate for that is Bitcoin.

I expect there are many people like me, who have either come to Bitcoin recently or who do not have the broad technical, economic or political experience to understand the reasoning being maximalism. There are others too who see altcoins as an economic opportunity and do not care for the Bitcoin narrative.

I want to spend some time exploring Bitcoin, the history and reasoning for maximalism and why it is important. As such, this week I have an interview with Pierre Rochard, host of the Noded Bitcoin podcast and co-founder of the Nakamoto Institute. We talk about Bitcoin Maximalism, the net benefit of altcoins to Bitcoin and hyperbitcoinization.