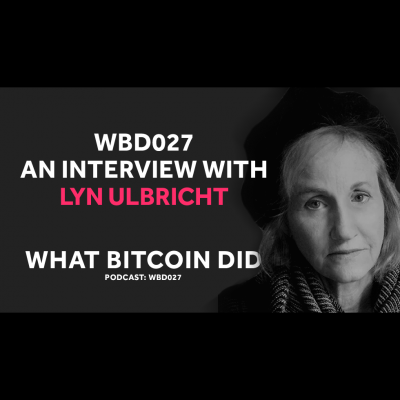 What Bitcoin Did #27 An Interview with Lyn Ulbricht

“That’s why the founders wrote the 6th ammendment, to protect the accused from judges, just on their own, deciding that something is true without the ruling of 12 jury members.”

I first met Lyn Ulbricht in Austin in March earlier this year to discuss the case of her son, Ross Ulbricht, the founder of the online marketplace: The Silk Road. Our interview was before the decision of the Supreme Court to decline their petition to have the case reviewed.

Ross and the family are now left with very few options and are focused on raising awareness in political circles in search of clemency from the President.

If you are interested in the case and did not hear my first interview with Lyn, I would recommend listening to it or watching the interview on YouTube.

The petition to the Supreme Court focused on alleged violations of both the 4th and 6th amendments, yet the Supreme Court denied Ross a retrial and provided no comment. The case is widely misunderstood, often with those not aware of the full facts of the case raising the charge of murder for hire as justification for the sentence, a charge which has been dropped.

Ross is facing the rest of his life in prison for what was a non-violent crime, and for which the Drug Policy Alliance said:

In a world operating on the modus operandi of prohibition, users are often left in the dark and all sorts of other precarious situations; purchasing at music festivals is one glaring example. “The overwhelming consensus among users of the Silk Road,” Bartlett realized, “was that the quality of the product was far higher and its purity far more reliable than anything you’d find on a street corner.” Goodbye stranger-danger, dark alleyways, and unknown/unlabeled substances. The Global Drug Survey of 2015 confirmed this, stating “reduced rates of exposure to violence, less adulterated drugs, more confidence in product quality and removal from street dealing were clear benefits.” Will this access lead some to experimenting with other drugs? Sure, maybe. What’s clear however, is within this system, people are able to better regulate and reduce harm associated with their drug use.

In this interview, I talk to Lyn about the denial of the Supreme Court, the support of the Libertarian Party, the petition for clemency and life for Ross inside the prison.