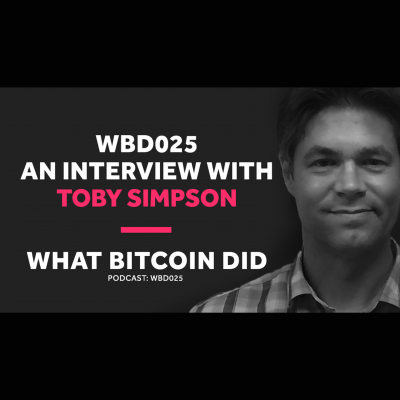 What Bitcoin Did #25 An Interview with Toby Simpson

“I don’t like calling it artificial intelligence as it implies it is not real. At some point, we will create this digital intelligence, and it will think, communicate and exist. I think that is an exciting thing and can be something which transforms our lives in all sorts of positive ways.”

In 2014 Stephen Hawking told the BBC: "The development of full artificial intelligence could spell the end of the human race." A fear echoed by many tech leaders, from Bill Gates to Elon Musk. The concern is the unknown unknowns; while technology has managed to improve our lives in many ways, machines operate by code based rules, but with AI, we are moving towards machines which can think for themselves.

AI is already part of our lives, from Google suggestions to Siri and Alexa learning about our personal preferences, but this is basic machine learning. More advanced questions are now being asked, for example with driverless cars, the car may have to make life and death decisions, should these be a programmed set of rules or is the computer left to think for itself? If the car is heading into a crash with another vehicle and the only option is to swerve into an oncoming bicycle, what decision should the car make?

What is the full extent of the risk? From autonomous weapons to destructive decisions to achieve something beneficial, AI faces many complicated moral and ethical questions. And the unknowns, a digital superintelligence released onto a global network, able to think for itself, hack and make decisions which humans would not.

Artificial intelligence innovation is accelerating, and regulation is light to non-existent. Companies such as Fetch are using machine learning to build a better future, for business and the public too, but are we heading into a dangerous period for humans?

In this interview, I talk with Toby Simpson, the co-founder and CTO of Fetch.ai. We discuss the world they are building for autonomous economic agents and broader opportunities and threats from artificial intelligence.