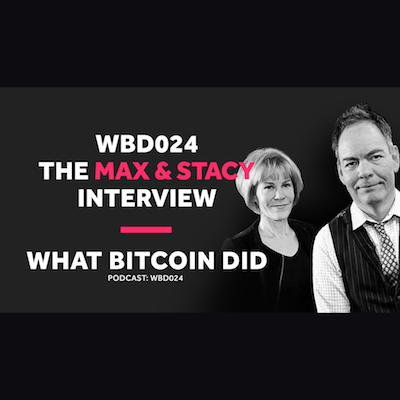 What Bitcoin Did #24 An Interview with Max Keiser & Stacy Herbert

“There is no win for the UK economically, you can change the colour of your passport and you might feel good, but you are not going to have any economic benefit at all from Brexit.”

In 2010, Max Keiser called JP Morgan Chase "the biggest financial terrorist on Wall Street" and started a campaign to crash the bank by encouraging people to buy Silver, leaving JP Morgan with a significant short position.

JP Morgan is just one example where Max has challenged financial institutions. Whether as a guest on TV, via Twitter or his media outlet, The Keiser Report, alongside his wife Stacy Herbert, Max regularly highlights the unethical practices of big banks and fiscal mismanagement from governments.

Max first introduced Bitcoin to the Keiser report in 2011; he realised that it was sound money, outside of the control of governments and banks, and The Keiser Report was the only media outlet promoting it. Max has continued to support Bitcoin and is one of the leading voices in the community, confident that the price of a single coin will reach over $100k.

In this interview, I talk to Max and Stacy about Brexit, the inevitable death of paper money and why Bitcoin is so important.