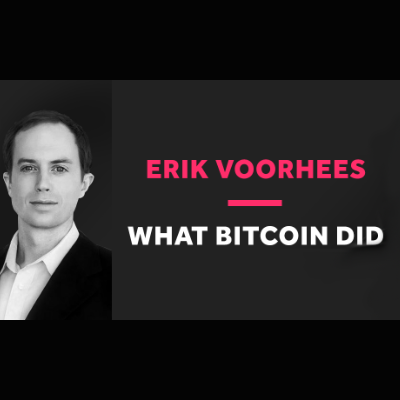 What Bitcoin Did #22 An Interview With Erik Vorhees

“Things like money, education and healthcare are super important, that is why governments shouldn’t be involved in them whatsoever.”

The Crypto space appeals to the libertarian ideals of separating money and state. Those who I have met on my podcasting journey consistently say that same thing, from tax being theft to not wanting their money stolen to pay for the war machine. Bitcoin appeals because the money supply sits outside of government control:

Erik Voorhees does not shy away from his opinion on the role of the state and believes that with Cryptocurrencies we have the opportunity of changing the role of government. He is a successful businessman too, from Coinapult and Satoshi Dice to Shapeshift and Keepkey, Erik has consistently built successful Crypto businesses.

While touring Shapeshift around Europe, I had the chance to meet with Erik in London where we discussed his political and social views, problems with ICOs the latest on the many Shapeshift.