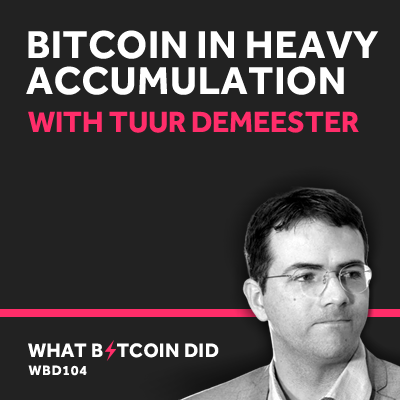 “Thinking in Bitcoin is powerful, but it takes time. It is this mental switch.” — Tuur Demeester

The bear market of 2018/2019 has been a particularly hard lesson for many who are new to Bitcoin. While the +84% drawdown has been similar to previous bear markets, the real numbers are brutal. Anyone buying a Bitcoin near $20,000 saw their asset lose over $16,000 and the low in the market.

Understanding market cycles and adapting to them is a lesson for all hodlers; there is evidence that the current bear market may be over, and we are entering a period of accumulation. With the recent push to +$6k and Bitcoin settling in the high $5k region, the low for this cycle may be in and therefore now might be the opportunity to start preparing for the next bull run.

Tuur Demeester’s recent report: Bitcoin in Heavy Accumulation is a detailed analysis of the market and data, concluding that whales may be accumulating ready for the next bull run, but this is not without risk.

I spoke with Tuur about the report, discussing evidence from the blockchain, historical data, risk analysis, how accumulation happens and the fundamentals which drive Bitcoin’s price.