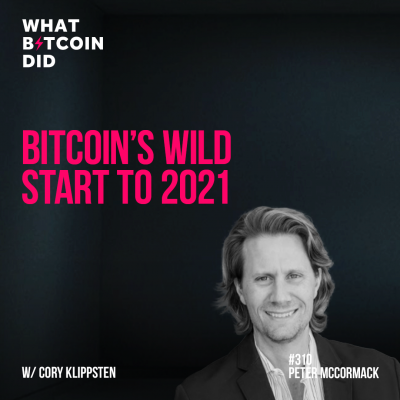 We are just over a month into 2021, and it has already been a wild start of the year for Bitcoin and the broader financial markets.

The r/wallstreetbets subreddit took it to Wall Street by collectively buying up the heavily shorted GameStop (GME). The stock price went from around $20 in mid-January to over $450 in less than two weeks, wiping a staggering $4.5 billion off Melvin Capital’s balance sheet.

In early February, corporate Bitcoin evangelist Michael Saylor held his ‘Bitcoin for Corporations’ event which around 7,000 companies attended. Just days after the conference, Tesla announced that they had bought $1.5bn of Bitcoin.

With any bull market, shitcoins also see an increase in activity. With the rise of Clubhouse, the salesmen are out in force. Yet, Bitcoiners are marshalling the rooms, educating newcomers on why Bitcoin is the only asset they should be considering.

In this interview, I talk to Cory Klippsten, the founder of SwanBitcoin. We discuss how shitcoiners are invading Clubhouse, r/wallstreetbets, corporations buying Bitcoin, and which nation-states will first disclose a Bitcoin position first.