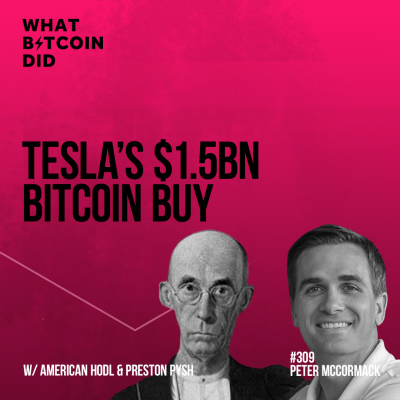 On Monday, Tesla made the announcement that Bitcoiners had been anticipating. In their annual report to the SEC, Tesla disclosed that they had invested $1.5 billion in Bitcoin and the Bitcoin price soared to a new all-time high of over $47,000.

In 2020, Michael Saylor and MicroStrategy paved the way for corporations to add Bitcoin to their treasuries and since then several companies have followed suit, including Square and MassMutual.

However, as the richest man in the world and one of the most influential in the tech industry, Elon Musk's could prove to be the most important in the history of Bitcoin. It has sent shockwaves through the corporate world and will make the CEO of every publicly traded company question their treasury strategy. But, what does this mean for Bitcoin? And does this mark the beginning of the corporate race for Sats?

In this interview, I talk to American HODL and Preston Pysh, author, engineer & the host of The Investor Podcast. We discuss Tesla's announcement, MicroStrategy's influence and corporations scrambling to buy Bitcoin.