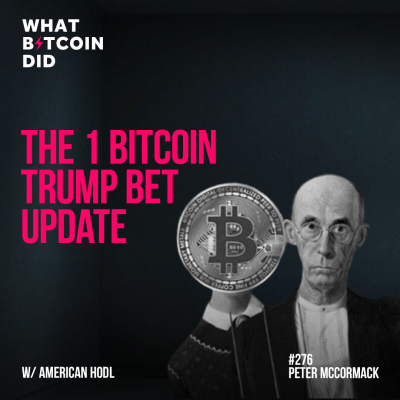 In July, I tweeted that I would bet anyone $5,000 that Trump would lose the 2020 election. American Hodl took me up on the bet, and with the help of Phil Geiger we each deposited 0.5 BTC into a multisig.

With the election this week, I caught up with American HODL three times, before, during and after the election to discuss everything that is happening.

While Joe Biden went into the election as the clear favourite, according to the polls, it wasn’t long before the narrative switched and by the early hours of election day UK time, Trump looked sure to win.

The following morning, as the results of mail-in ballots hit the counts, the election swung back in favour of Biden. With Wisconsin and Michigan flipping democrat and Pennsylvania threatening to do the same, Biden looks like he may win the race to the Whitehouse.

The election has not been without drama, with accusations from Donald Trump and his supporters of fraud. Now legal challenges are being submitted, and the path to a decision is unclear.

In this interview, American HODL and I catch up before, during & after the US Election. We follow the ups and downs of election night, Trump threatening legal action in various states, demanding recounts and what happens between now and the inauguration.