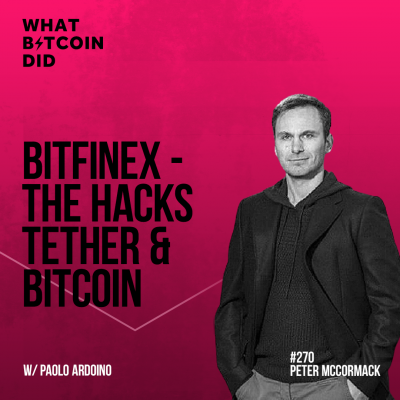 WBD270 - Bitfinex - The Hacks, Tether and Bitcoin with Paolo Ardoino

Bitfinex is one of the oldest and largest Bitcoin exchanges. Since 2014, the exchange has had to endure multiple hacks, including at $60 million theft in 2016.

iFinex, the parent company of Bitfinex, also oversees Tether. Tether is the largest stablecoin, regularly facilitating over $50 billion in daily trading volume and is supported by close to 150 exchanges. It too isn't without its controversies, there have been calls to audit Tether to prove that it is fully reserved and there are claims ether printing has been used to manipulate the markets.

Despite the controversies, the Bitfinex and Tether teams have been instrumental in supporting the growth of Bitcoin.

In this interview, I talk to Paolo Ardoino the CTO of Bitfinex. We discuss how Bitfinex dealt with the exchange hacks, protecting against future attacks, Tether, the Lightning Network and funding Bitcoin projects.