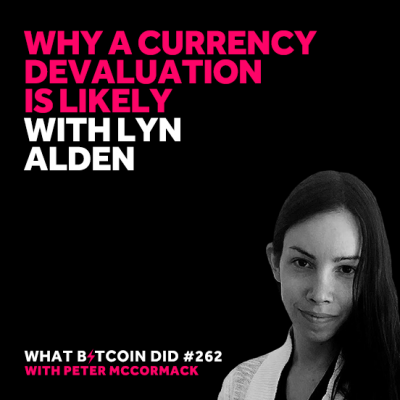 WBD262 - Why a Currency Devaluation is Likely with Lyn Alden

When COVID-19 struck, governments across the world implemented unprecedented stimulus packages to help what were already fragile economies, which had never fully recovered from the 2008 global financial crisis.

While the economy moves in short-term 5-10 year cycles, a larger multi-decade cycle appears to be coming to an end. As governments pursue further rounds of quantitive easing, debt to GDP levels are heading towards what Lyn calls the event horizon, where debt to GDP is over 130% and currency devaluation is the most likely outcome.

Holding cash through a currency devaluation risks losing purchasing power as governments increase the money supply to service debt, thus scarce assets such as gold and Bitcoin are a safe haven.

In this interview, I talk to Lyn Alden, a macroeconomist and founder of Lyn Alden Investment Strategy. We discuss the current state of the economy, monetary and fiscal policy debt cycles and if we should expect currency devaluation.