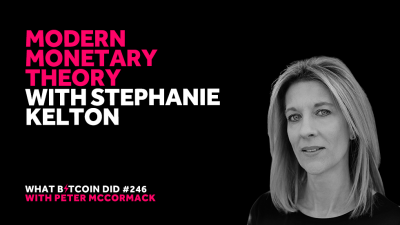 With the abandonment of the gold standard in the early 20th century, there has been nothing to limit the amount of money a central bank can print, leading to a rapid rise in national debts. In the US debt alone, the national debt stands at $26.5 trillion, and the growth is accelerating.

While conventional economic theory would suggest this ever-growing debt is dangerous as it can lead to uncontrollable rises in inflation and a devaluing of the dollar, there is a newer school of thought; Modern Monetary Theory which makes a different argument. MMT suggests that governments should not be concerned with increasing debt, arguing the only risk is inflation, which is controllable.

MMT is the antithesis to the Austrian school of thought that aligns with Bitcoin’s monetary policy of fixed supply and deflationary issuance.

In this interview, I talk to Stephanie Kelton, professor of economics and public policy at Stony Brook University. We discuss the benefits of modern monetary theory, why increased spending may not lead to inflation, national debt and money printing.