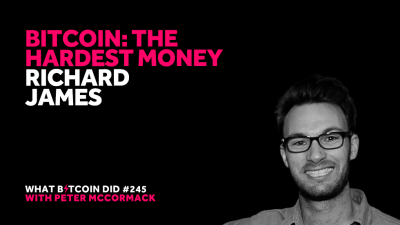 Some of the earliest forms of money included seashells and glass beads before people discovered precious metals and began trading using silver and gold. Anything can be a medium of exchange, but the forms of money that have stood the test of time are scarce.

We are now in the era of fiat money; government-controlled, paper money, with no intrinsic value or backing. Fiat money is easy to produce, and with that, there is a huge incentive for governments to keep printing more of it. They do this for several reasons from bailing out business to providing economic stimulus when their policies have failed.

Throughout history, gold has been the hardest form of money, until 2009, when Satoshi Nakamoto created Bitcoin. With a fixed supply of 21 million and a controlled issuance, Bitcoin is the hardest money we have ever seen.

In this interview, I talk to Richard James, the creator of Hard Money, a film looking at how money has been corrupted and co-opted. We discuss Austrian economics, the similarities between gold and Bitcoin, Hard Money and modern art.