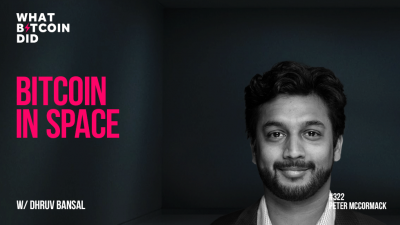 What Bitcoin Did - WBD322: Bitcoin in Space with Dhruv Bansal

With SpaceX CEO Elon Musk “highly confident” that his company will land humans on Mars by 2026, the human colonization of another planet within our solar system has never been closer. Once humans settle on another world, one question that will have to be solved is what money will be used as the local currency? The obvious answer may, on the surface, be bitcoin. But how would that work?

With the time it takes to send a signal over such a vast distance, we will need to consider how bitcoin functions at scale throughout the solar system. Sending bitcoin transactions from Mars to Earth could work fine if you don’t mind waiting several hours for confirmation, but mining will be impossible on Mars. So, will we use bitcoin on Mars, or will its colony rely on a new ‘Muskcoin’?

In this interview, I talk to Unchained Capital co-founder Dhruv Bansal. We discuss his Bitcoin Astronomy series of articles, the prospects of Bitcoin as an interplanetary currency, SpaceX, colonization of other planets, and hyperbitcoinization.