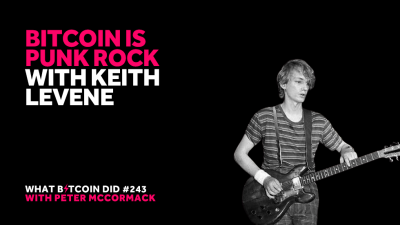 Bitcoin is the most significant disruption to money the world has seen in hundreds of years. It takes power away from centralised parties, and it allows any individual to be entirely self-sovereign and operate in an open system uncontrollable and uncensorable by anyone.

Punk was not just about music; it was a movement that fought for personal freedom and individualism while remaining staunchly anti-establishment.

Keith Levene is a punk legend and was a founding member of iconic band The Clash and co-founded Public Image Ltd alongside former Sex Pistol, John Lydon.

With the alignment of punk and Bitcoin, it is not surprising that Keith Levene is a Bitcoiner, and a couple of months ago Keith reached out to me and told me he was a regular listener of the show.

In this interview, we discuss the early days of punk rock, the similarities between punk and Bitcoin and why he cares about Bitcoin.