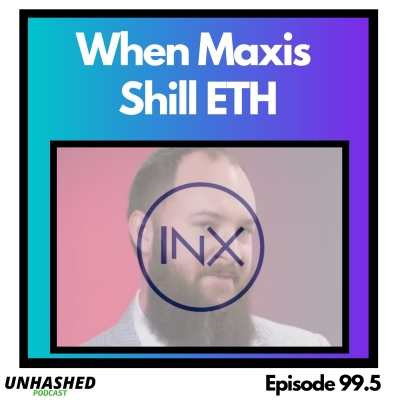 On this week’s episode of the Unhashed Podcast: Bitcoin Maximalists like Jameson Lopp and Alena Vranova are shilling an Ethereum compliance coin that they are advisors on. Is this a hypocrisy that calls into question their whole reputation or a big nothing burger (or something in the middle)?

A whopping 21,454 BTC was just swiped off the market by intelligence and mobile software company MicroStrategy. It became public knowledge in a MicroStrategy filing with the U.S. Securities and Exchange Commission. A MicroStrategy press release indicates that the firm had been planning the move as part of a capital allocation strategy that it had announced in its Q2 2020 financial results release on July 28. The news that an otherwise institutional business intelligence company had just invested $250 million (nearly 25 percent of its full value) to buy 0.1 percent of the total BTC supply quickly spread across multiple Bitcoin-focused social media platforms and news outlets.

There was no shortage of expressions of joy among those who shared their thoughts and opinions about this massive institutional purchase. In the press release, the CEO of MicroStrategy, Michael Saylor, shared his reasoning for wanting to hold bitcoin as the company’s primary treasury reserve asset in a way that shows he’s really done his research.

Not only did Saylor comment on how he thinks bitcoin is “digital gold” and is “smarter than any money that has preceded it,” but he also recognizes some of the other positives that Bitcoin can bring. “The investment reflects our belief that Bitcoin, as the world’s most widely-adopted cryptocurrency, is a dependable store of value and an attractive investment asset with more long-term appreciation potential than holding cash,” Saylor said, per the release.

Bitcoin custody solution provider Casa has announced that it is offering in-wallet bitcoin purchases, allowing Casa App users to forgo exchanges when they add to their HODLings. Casa explained that users can make these purchases using Apple Pay or debit cards, which connect them to retail exchanges through a secure API provided by Wyre. Wyre offers similar services to other projects in the space, such as DropBit. Casa, which positions itself as a particularly security-conscious provider of private key management, noted that while this feature adds convenience, it does not impact custody or the safety of funds.

Aaron van Wirdum of Bitcoin Magazine writes: Taproot, a potential upgrade to the Bitcoin protocol first proposed by Bitcoin Core contributor Gregory Maxwell, is in its late stages of development. The technology consists of a clever combination of crypto-tricks that would let users hide complex smart contracts inside regular-looking transactions — the complexity is only ever revealed if parties to a contract are uncooperative. Leveraging this idea, Bitcoin Core contributors including (but not limited to) Jeremy Rubin, Antoine Riard, Gleb Naumenko and Gregory Maxwell himself have been speculating about a general concept referred to as payment pools.

Payment pools would let groups of users share ownership of the same coins (technically: UTXOs) as recorded on the Bitcoin blockchain, while letting any of these users make (or receive) payments with them. As the group and its individual members “hide” in a Taproot structure, all of them enjoy more privacy, smart contract flexibility and other benefits… and they potentially even enjoy these benefits off-chain, making payment pools a new Layer Two solution

Coinbase will allow U.S. retail customers to borrow fiat loans against as much as 30% of their bitcoin holdings in the fall, the San Francisco-based exchange announced Wednesday.

Coinbase is one of the largest and most regulated crypto exchanges to get into the lending business, and the exchange is setting conservative parameters on the product, capping credit lines at $20,000 per customer and offering an interest rate of 8% for bitcoin-backed loans with terms that are a year or less.

Bitmex will be launching our User Verification Programme at 00:00 UTC on 28 August 2020, where all customers will be asked to complete ID checks within the next 6 months. These new controls will enable us to create a more trusted and secure trading environment for all BitMEX users.

BlockFi has announced the close of a $50 million Series C fundraise. Sources say the company’s valuation stands at $400 million. The additional capital will help the firm continue to grow at a fast clip, says CEO Zac Prince. The firm could be crypto’s first SPAC given the right market conditions

At the same time, BlockFi tweeted this out: “As we continue to grow, we plan on adding as many cryptos as possible. Keep an eye on our Twitter for updates!”

The Gibraltar-based INX Limited today began its initial public offering for 130 million security tokens that can be used with its upcoming cryptocurrency exchange, following approval from the United States Securities and Exchange Commission (SEC). And there are unexpected figures in the fray: Bitcoin maximalists Jameson Lopp, Samson Mow, and Whale Panda. All have criticized Ethereum and many other tokens in the past, but they’re onboard with INX. In response, Lopp tweeted: “Not an equity offering. Not yo' mama's ICO. A guaranteed share of cash flow.”

Coinbit, supposedly South Korea’s third-largest cryptocurrency exchange in terms of trading volume, has reportedly been seized by police over allegations that it faked most of that volume. According to a report from Seoul Newspaper on Tuesday, local police raided and confiscated the company's Gangnam headquarters and other premises. Accused of fraud, the firm's owner, Choi Mo, and other managers are said to have artificially inflated volumes on the exchange by using "ghost" accounts to make fake trades, a practice known as wash trading. In its report, Seoul Newspaper said it had been informed by insiders of corruption at Coinbit months ago and that up to 99% of trading volume was "manipulated" on the platform.

Producers of the Show: It’s time to thank the people who are making this show happen: