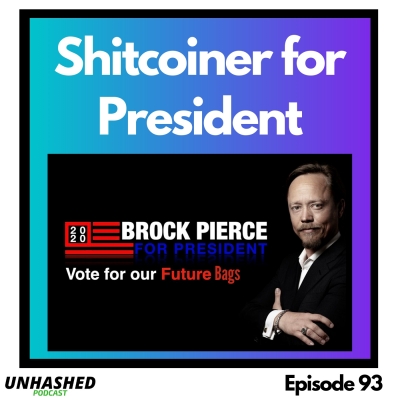 Shownotes: On this week’s episode of the Unhashed Podcast: Bitcoin gets funding out the ass! Shitcoine and First Kiddie Fiddler Brock Pierce announces his independent run for president. And…Hamas has raised a laughable amount of money in crypto. Is this good or bad?

Weekly News Wrap Up: BitcoinMagazine writes: As the saying goes: when it rains, it pours. And lately, the Bitcoin Core development community appears to be experiencing a welcomed shower. On June 18th, Cryptocurrency exchange OKCoin and HDR Global Trading Limited, which operates the cryptocurrency exchange BitMEX, announced a $150,000 grant for Core developer Amiti Uttarwar. The donation follows similar gifts from both donors, as well as others, that have been announced in recent weeks. Uttarwar focuses on Bitcoin’s peer-to-peer layer, notably reducing the frequency that wallets attempt to rebroadcast transactions and, therefore, the frequency with which transaction information is revealed through her work on PR #18038.

From the HRF’s site: The Human Rights Foundation has launched a fund to support software developers who are making the Bitcoin network more private, decentralized, and resilient so that it can better serve as a financial tool for human rights activists, civil society organizations, and journalists around the world. An initial gift from the fund was given to Chris Belcher, a UK-based developer working on a technique called “CoinSwap” (originally invented in 2013 by Greg Maxwell) which helps defeat state and corporate financial surveillance by making it much harder for authorities to trace Bitcoin transactions.

As announced on BTCpayserver’s blog, We’re thrilled to announce that the BTCPay Server Foundation has received a grant of 150,000 USD (received and held in Bitcoin) from Kraken. This is the biggest donation we’ve received so far. Founded in 2011 by Jesse Powell, Kraken is one of the world’s largest, oldest and most reputable bitcoin exchanges. Based in San Francisco with offices around the world, their core mission is to accelerate the adoption of cryptocurrency so that anybody can achieve financial freedom and inclusion.

Everyone’s favorite Bitcoiner Foundation Chairman has tossed his goofy-ass fedora into the presidential ring! Yes, Brock Pierce is now running for president. No he doesn’t think he can win, but in comparison to Ron Paul, he stated that he was running to bring certain issues to the forefront.

An interesting statistic from a new Leigh Cuen Coindesk article “To date, evidence suggests terror groups like Hamas are using only small amounts of bitcoin, at volumes far smaller than what the civilian population in the region is using. In fact, the analytics firm Chainalysis estimates most campaigns by terror groups like ISIS have raised “less than $10,000” worth of cryptocurrency, less than a single Palestinian trader typically sells in a week.”

From the Desk of Coin (ahem...Coindesk): More than 75 companies in the blockchain and cryptocurrency industry collected at least $30 million in payroll loans from the U.S. government. The U.S. Small Business Administration (SBA) published details of its Paycheck Protection Program (PPP) on Monday, revealing a who’s who of major and minor firms in the industry. Loan recipients included Zcash developer Electric Coin Company, Ethereum venture studio ConsenSys and Rainberry Inc., the U.S. entity acquired by Justin Sun’s Tron Foundation at the time of its BitTorrent acquisition in 2018. Crypto venture firms were also represented on the list, including Polychain Capital and Unchained Capital.

Producers of the Show:

It’s time to thank the people who are making this show happen: