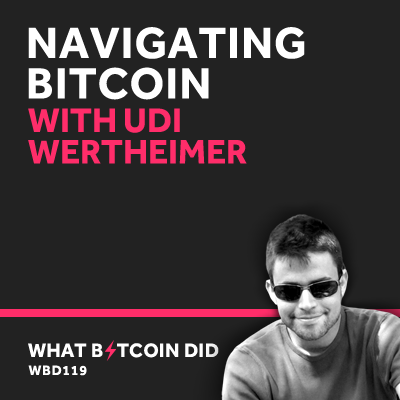 For new people discovering Bitcoin the rabbit hole is deep, from tech to security to economics, there are many topics to understand. Further, the long and volatile history of Bitcoin is also relevant, from how the tech has evolved to the personalities to critical events such as the scaling war. Bitcoin is hard!

Bitcoin can also be unwelcoming; the social channels for discussing Bitcoin can be hostile. Whether on Reddit or Twitter, a misstep can be met with anger and humiliation.

Some argue that toxic levels of hostility are good for Bitcoin as it defends against hostile attacks, others (myself included), while understanding the hard-line nature of some Bitcoiners feel that there needs to be a more considered effort to onboard and educate people about Bitcoin and the risks of altcoins.

In this interview, I chat with Udi Wertheimer. We discuss Bitcoin maximalism, twitter beef and toxicity, the future of Bitcoin and the benefits of competition, Ethereum developers, and whether businesses should use blockchain.