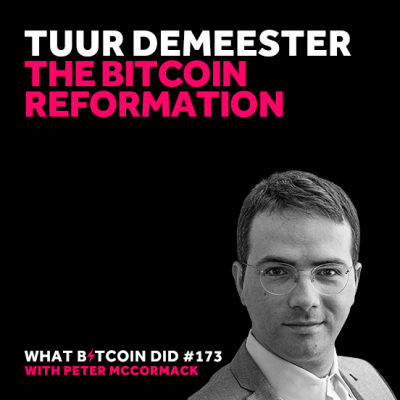 The 16th-century Reformation was a political and cultural upheaval that spread across central and northern Europe. Reformers questioned the power and authority of the Roman Catholic Church and wanted change.

With the Reformation came decades of rebellion and several wars. However, the Reformation also brought with it a significant political and religious shift to greater freedom and a move towards the world we now live.

Could a new Reformation have Bitcoin at its heart? Will cryptography, computation and telecommunications be the 21st-century equivalents of the printing press, bookkeeping and the hourglass of the 16th century?

Millennials have grown up in the wake of 9/11, where safety is not guaranteed, and trust is not a given. The millennials early adulthood witnessed the 2008 global financial crisis, living through a recession and budget cuts alongside reckless and immoral banking practices.

Millennials are also the primary adopters of Bitcoin, and by 2029 they are expected to be the generation with the largest share of disposable income. They will likely be controlling the management of significant funds and institutional money, and this could mean a paradigm shift in the way the world sees and uses Bitcoin and lead to the Bitcoin Reformation.

In this interview, I talk to Tuur Demeester; macro investor, analyst, business cycle expert and founding partner at Adamant Capital. We discuss his recent article The Bitcoin Reformation, Bitcoin financial services and distrust in the current banking system.