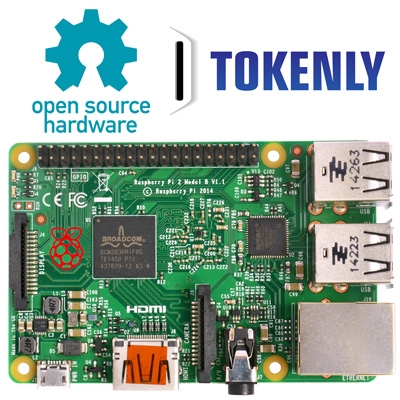 Open Source Hardware is a popular and growing movement. An organization (sometimes charity, usually a non-profit) develops hardware designs and specifications and publishes them to the open source without the desire or potentially the ability to produce the physical products exclusively themselves.

The Raspberry Pi project is a perfect example of this with two official stocking manufacturers who share back some of their revenue in compensation for their official status. This money supports further development. By adding three types of tokens to the ecosystem, what is a game for only the biggest of players can become a vibrant environment of efficient, decentralized and distributed reselling. Now distribution can start to take place.

The Foundation, Manufacturers & The License Token

The Raspberry Pi foundation will issue and sell a token that represents the recommended donation (think of it like an open source license prepayment) for a single manufacture of a standard raspberry pi. Manufacturers will receive competitive benefits when they pay the fee for each unit they manufacture.

When a manufacturer redeems one of these tokens, they have it added to their total on the leaderboards - This leaderboard will be used as the basis for which manufacturers are prominently featured, or recommended on the official open source project outlets.

This makes sense because warehousers have the choice of different manufacturers to work with. Manufacturers who are popular can buy the license tokens in extreme bulk to achieve the largest discounts, then redeem on behalf of warehousers who would rather not bother with the token.

The more tokens a warehouser or manufacturer redeems over time, the more prominent their position in the open source community as a supporting part of the reselling and manufacturing ecosystem.

Each warehouser will issue their own redeemable token which includes free delivery within their regional area. These tokens also have quantity discount programs which encourage the creation of sales organizations that can buy fulfillment tokens in bulk, sell units to end users for cash and redeem the fulfillment tokens on their users behalf.

Sales organizations never have to take delivery of the units. They can work with multiple warehousers to ship from wherever makes the most sense. Product could be shipped from their local warehouse or shipped from another warehouse when the token is redeemed.

Warehousers get customers they wouldn’t have had before and whenever they’re the most logistically rational option, they will get the sale.

When a sales organization gets a sale in a new area, it will make sense for them to buy the least quantity that gets them the best discount. That might be 10% off retail when they order 2, or 15% at 10 - Their profit is directly proportional to the quantity they are able to buy, so popular geographic areas or areas where they can get large orders will allow them to achieve greater profit margins or offer greater savings.

Assume for a moment there are thirty warehousers all issuing their own token, each geographically located and with regional shipping included in the price of their token.

They each sell on the internet. Some of the time they get orders from people who are not in their geographic region. They could ship their own product and charge the shipping fee, or they could buy or swap for a local warehousers token and then redeem it on behalf of their customer. This is interesting.

Even more interesting, a third party individual or company could, without permission, operate a network of thirty one vending machines that allow any local warehouser’s token to be exchanged at little or no extra cost for any other. This means that any warehouser who has inventory in token form can sell an item to a distant customer, have it fulfilled and delivered locally and instead of paying a dollar cost, they barter future fulfillment.
Someone could also independently offer a “Global Free Delivery” token backed by local fulfillment tokens. We could simply add one additional payment option to the thirty one vending machines described previously. Now they can all accept the GFD token in exchange for their local delivery token, and if someone wants to sell their local delivery token they can get a GFD in exchange.

With a small investment on the part of the company running the GFD, they could buy bulk quantities of all local warehouser tokens and have this value backing be publically auditable (and swappable, since it would be in public vending machines) With a public backing, everyone could accept the GFD token and accept any order knowing that they will only ever ship to local users. Yet they would still be able to sell to anyone and offer free shipping so long as they are in the fulfillment range of one of the warehouser nodes.

All of the roles described can be filled by multiple independent companies or individuals, none of whom have to coordinate, go out of their way to cooperate, even have relationships and certainly not ask permission before doing whatever they want.

Tokens will add so much to open hardware manufacturing and distribution networks because these are systems that have always intended to be as open and inclusive as possible. They forgo a monopoly on making their own product because they want many people to make it. Whether for philosophical or practical reasons, the economics of the situation and especially the time/value cost of each relationship has made it impossible for all but the largest participant to be more involved than buying units or donating.

This is a wild advancement, made possible by the cash-on-the-barrel nature of Cryptocurrency and Cryptographic Tokens and although trust is required in any type of system using real inventory tied to digital tokens, there is only ever risk when talking about manufacturers or warehousers.

The benefit gained is that anyone who could sell the product at near-retail price to their online or local community now has an easy path to doing that and a clear and predictable monetary gain from doing that. Which means more people using products which in a perfect world would be ubiquitous and pervasive.