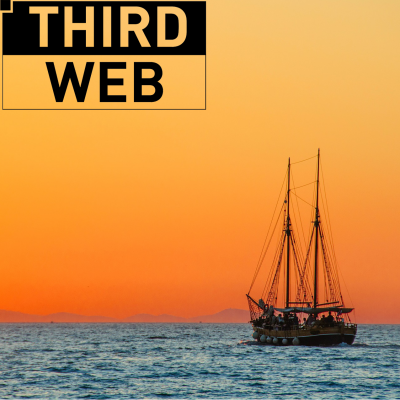 Today we’re wrapping up The Ether Review and kicking off The Third Web. Some of the remarks I make in this episode are overstated and under qualified. Please feel free to critique any views you disagree with in the comments and if there is sufficient intelligent controversy I’ll revisit the subjects in question in subsequent episodes.

This podcast is targeted at industry observers looking for a technical examination of issues on the frontier of what has become known as the blockchain space. However, for those less versed in the field, supplementary content will be published in anticipation of each episode. Failing that, I’ll add links in the notes to help along the casual listener.

Blockchain technology, and specifically, the idea of a value-transport enabled internet is no longer new. Looking at the recent history of the space, we see a hockey stick of innovation and investment.

In 2014, just as the first ICO boom launched, I began producing my first podcast, Beyond Bitcoin. It explored the explosion of new blockchain platforms and other innovations in the space.

As exciting as this technology was, common problems existed across all platforms: scaling to support broad adoption, and providing a service the mainstream market would accept.

After speaking with Meher Roy and Tim Swanson about these problems in early 2015, the line of questioning that inspired me to create Beyond Bitcoin came to an end. In that final episode, we settled on a view of the future in which a network of blockchains secured by permissioned validators would enable global value transfer. This made more sense than a future based on permissionless blockchain networks and all the challenges that came with them.

Then came Ethereum. Infinite functionality paired with an aggressive scaling roadmap reopened the question of what might come next, this time examined in a new podcast, The Ether Review.

Two years on, having been immersed in the world of Ethereum, interviewed hundreds of people for podcasts, articles and videos and worked for the largest blockchain centric company in the world - ConsenSys, a disturbing reality has become apparent. We have not moved on from the paradigm of 2014, and the Ethereum scaling roadmap will not provide the performance new use cases need to emerge.

In future episodes of The Third Web, we will examine blockchain scaling, and ask the questions: What are the design trends bringing greater transaction supply to the market? What new business models will this enable? What new services can we expect to see, and what products will be built using those services?

Meher Roy was a virologist working in the vaccines industry when we first spoke in 2014. Today he is focussed full time on the blockchain space and hosts the excellent Epicenter podcast.

Tim Swanson was director of market research at R3 for two years and has recently founded his own research company, Post Oak Labs

That was it! The first episode of The Third Web! A big thanks to Breakmaster Cylinder for the tunes. No social, email, or web accounts just yet but you can reach me on twitter @arthurfalls. Of course you should subscribe on itunes or your favorite podcast manager. this feed will probably still be called The Ether Review but it will update in time.