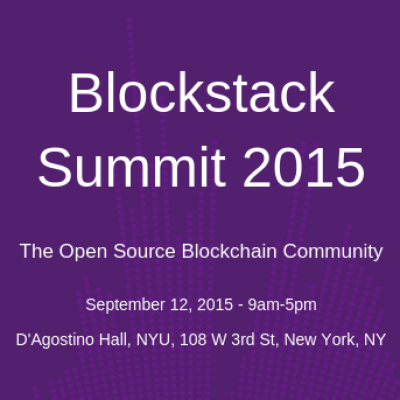 The Road to Blockstack Summit

In just a few short weeks, the Blockstack community will be hosting its first event on September 12 at New York University in New York City. Blockstack Summit will bring together some of the top developers working on blockchains and decentralized applications to discuss the challenges and opportunities presented by this technology. I've been kept busy (and away from my podcast!) this summer helping to organize Blockstack Summit alongside NYU Professor Lakshmi Subramanian, and we couldn't be more proud and excited about the great lineup of presenters, panelists, and attendees who will be participating in this event. The road leading to Blockstack Summit has been a long one for me; this is the story of my journey so far.

I first became interested in blockchain technology a few years ago through my interest in alternative currencies. Bitcoin seemed to solve many of the problems associated with previous attempts at alternative currency systems; most importantly, Bitcoin removed the need for a central point of control (and failure) which can be used to corrupt and destroy the system. I later learned about projects that used the blockchain to secure non-financial information. In early 2013, after studying peer-to-peer identity and reputation systems, I wrote about the possibility of using Namecoin to create a cryptographic login system that removed the need for passwords. This use-case for the blockchain - decentralized identity - has held my interest ever since.

In late 2014, I began working with the okTurtles Foundation to help them spread the word about their DNSChain project. DNSChain is software that uses the blockchain to replace Certificate Authorities, the trusted third parties that all web browsers rely on for Internet security. I met okTurtles co-founder Greg Slepak after I found DNSChain on GitHub and reached out to interview him for my P2P Connects Us podcast. Shortly after this interview, I began working with the okTurtles Foundation as a writer. Since then, we have been fundraising for the Foundation's 501(c)3 application, and Greg has continued to work on DNSChain and a spec to improve blockchain thin-client security.

Around the same time that I started working with the okTurtles Foundation, I began having conversations with my friend Harlan about projects we were working on and daydreaming about what it would look like if we put our ideas together. We started talking about what a “decentralized application stack” would look like, something that could be used to build a bunch of different apps – photo sharing, messaging, collaboration, etc – which could all seamlessly interoperate with open protocols. Harlan called it “the last social network,” because it would make all the centralized, proprietary “walled garden” social networks redundant and obsolete.

The “last social network” idea excited me, so I got to work writing up some ideas and Harlan built a website that pulled all these ideas off the GitHub repository they were stored in. We ended up calling the stack “DStack,” short for “Decentralized Stack.” All I did at the time was point to some projects that already existed and said, hey if we put these all together somehow, we could build a lot of cool apps on top which are completely decentralized. We would just need some decentralized tools for user identities, a way to store and transfer user data, and nice interfaces for the apps. Then Harlan and I both got busy with other projects, and we haven't really touched DStack since.

In early 2015, I met an entrepreneur named Jay Feldis through my friend Mike Doty, who I knew from a local bitcoin meetup. Jay and Mike had been working on a product they called “CoinBox,” since rebranded to “Bitseed,” essentially a small computer that one could use to host blockchain full nodes for research, development, mining and staking, to help relay transactions, or just to have one’s own copy of the blockchain to verify incoming transactions. Jay presented a Bitseed prototype at a bitcoin meetup hosted at the Internet Archive, and I was intrigued by the possibility for Bitseed to both solve the problem of low bitcoin node count by giving users an easy way to run their own full node and also make it easy for anyone to run their own DNSChain server.

Jay and Mike were working with another engineer named Konn Danley, who was helping them build the ecommerce store for Bitseed, and they told me they needed someone to help out with writing content for the website. I had some free time so I offered to help. When the website was almost done, I scheduled a tweet to go out a few days later, went back to work writing content for the site, and promptly forgot about the tweet. Right on time, the tweet auto-posted and ended up going semi-viral, getting over thirty retweets on Twitter while a Reddit post about Bitseed simultaneously shot to the front of r/bitcoin. Bitseed was out of stock within 48 hours. It seemed there was demand for plug-and-play bitcoin full node hardware, validating our initial hypothesis. The Bitseed team then went to work over the next few months fulfilling orders and working on a new version of the device.

During the R&D period for Bitseed v2, I was invited to join this new community of decentralized application developers called Blockstack. The mission was to build common infrastructure for the development of decentralized applications, a common “decentralized stack,” if you will. Sound familiar? I had found my tribe! I soon started helping them out, writing content for the website and inviting more people to join the community, later offering to help organize the Blockstack Summit event. Summer 2015 has been, for me, the summer of Blockstack.

Today, the Blockstack community is comprised of some of the smartest and most talented developers working on decentralized applications today, growing to include developers from 2WAY.IO, Bitmarkets, Bitseed, Creative Work, Fabric, Mine, Nametiles, OB1, the okTurtles Foundation, Onename, Stampery, Tierion, and ZeroNet. Developers working on these kinds of projects have all had to ask similar questions when thinking about how they will build their applications – start building components from scratch? Use this or that library? Is this the right tool? Can that software be optimized for building a decentralized application? As Blockstack matures, many of these questions will be answered for developers, who will then be able to focus on designing beautiful interfaces and great user experiences instead of worrying about infrastructure development and maintenance.

Using Blockstack, developers will be able to create decentralized versions of popular online services like Amazon, Youtube, Twitter, and Reddit, and even a whole new way of publishing and browsing websites, all with less time and deployment costs than was previously possible. Developers will be empowered to eliminate central points of control and failure from their applications, weaknesses which have previously led to Internet censorship, repression of political or social dissent, mass surveillance, billions of dollars in financial losses, and hundreds of millions of compromised identities.

As I recently mentioned on a panel at the Digital Currencies and the Blockchain conference, decentralized applications change the economics of hacking by eliminating the ability to compromise millions of accounts with one successful hack. In a decentralized network, attackers have to hack into every end-point, drastically raising the costs of compromising every account in the network relative to the cost of compromising a completely centralized system. Blockstack could be used to build such a decentralized “web 3.0” network that is more secure and more resilient than the web 2.0 that came before it.

For all these reasons and more, Bitseed and okTurtles have both joined the Blockstack community. Bitseed is a natural fit for software like Blockstack, and we look forward to working with the community to spread Blockstack nodes far and wide. In the spirit of the Blockstack mission to collaborate on common infrastructure, okTurtles and Onename recently announced they are working together to merge their blockchain ID projects and help advance the state of the art of decentralized identity technology. In addition, Bitseed and okTurtles are both going to be participating in Blockstack Summit, with Jay from Bitseed showing off the latest full node hardware and Greg from okTurtles giving a Lightning Talk presentation at the event.

Blockstack is effectively taking the "decentralized stack" that Harlan and I envisioned from dream to reality, with actual working code and a vibrant, enthusiastic community contributing to the effort. There is definitely a lot of work left to do, particularly around the exact definition of the stack and the governance of this new community organization, and we plan to discuss these topics during the workshop sessions at Blockstack Summit. I believe that if we work smart enough and agree on a shared vision, this new and growing community will be able to build something truly amazing and world-changing. If this sounds like something you want to be a part of, I invite you to join our community and come say hello at Blockstack Summit.