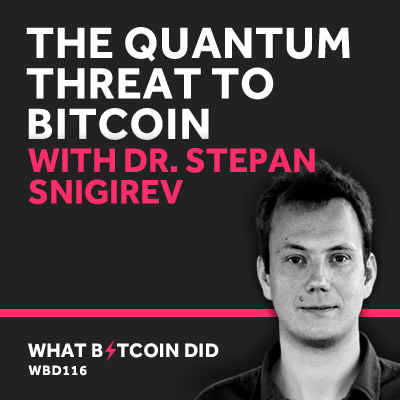 What Bitcoin Did #116 - The Quantum Threat to Bitcoin with Dr. Stepan Snigirev

Cryptography is the art of writing or solving codes, and there are several technologies which enable Bitcoin to function. When choosing to send Bitcoin to someone, a transaction is broadcast using the new owners public key and signed with the senders private key, and it is the senders private key which confirms to the network that the transaction is authentic. Further, a hashcash function is used to preserve the integrity of the blockchain.

“With this framework, we are able to achieve the essential functions of the Bitcoin system. We have verifiable ownership of bitcoins, and a distributed database of all transactions, which prevents double spending.”

The cryptographic protocols are hard to crack, which maintains the security of Bitcoin, but quantum computers pose a threat to this as they would be able to solve these problems easily.

In this interview, I chat with Stepan Snigirev about the quantum threat to Bitcoin. Having left his role as a quantum physicist to work on Bitcoin, Stepan is ideally placed to discuss the topic. Stepan explains the weird world of quantum mechanics, the status of quantum computing and the threat it poses to Bitcoin.