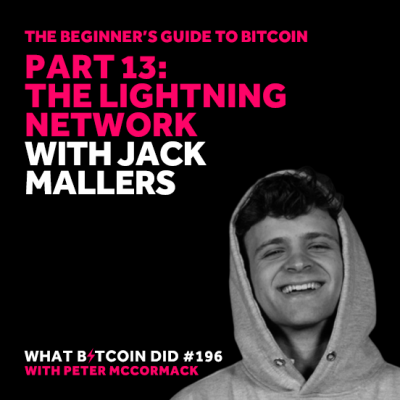 The Beginner’s Guide to Bitcoin Part 13: The Lightning Network with Jack Mallers - WBD

Bitcoin produces a 1mb block on average every 10 minutes. The block size and time limitations are essential for keeping the blockchain small enough so that anyone is realistically able to run a full node, keeping Bitcoin decentralised.

The block size limit, however, does present a scalability issue, as there is a maximum number of transactions that can be broadcast in each block. The limit led to an acrimonious scaling debate, lasting years which resulted in a fork of the Bitcoin protocol and the arrival of Bitcoin Cash. With Bitcoin, layer two solutions have been hailed as the best way to solve scaling.

The Lightning Network is a Layer 2 solution that runs on top of Bitcoin. By allowing users to create channels, Lightning allows for P2P micropayments that settle almost instantly and at a low cost.

The Lightning Network offers other benefits such as improved privacy because the details of Lightning payments aren't on the public blockchain.

The Lightning Network is still a relatively new protocol, as such, it can be intimidating to newcomers as the user experience has some key differences from transacting on the basechain.

In Part 13 of the Beginner's Guide to Bitcoin, I talk to Jack Mallers, the founder of Zap Lightning Wallet and Strike. We discuss the Lightning Network, the scaling debate, fees, settlement and the future of the protocol.