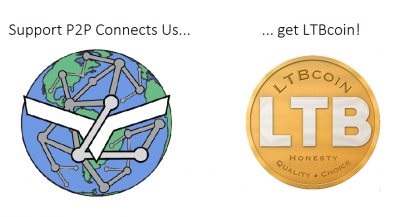 Support P2P Connects Us, Get LTBcoin

Recently, I set up a Patreon campaign for the P2P Connects Us podcast. For those who aren't familiar with Patreon, it's a unique crowdfunding platform for content creators. People who enjoy the content that a creator produces ("patrons") can pledge a certain amount of money, which is then charged to the patron's credit/debit card or PayPal account each time a new piece of content is released. So if someone pledges $5, then each time the creator released a new piece of content, they will be charged for $5. This system is a great way to supplement the ad income that many online content creators rely on, and with enough pledges, could actually replace ad income altogether.

For people who want to advertise on the show, P2P Connects Us has already experimented with selling ad tokens using the (now deprecated) LTB Auction tool and is currently accepting sponsor donations and advertising offers through the new LTB Network Sponsorship page. But for listeners who just want to support the show and help me keep the lights on, so far the only donation option has been the BTC tipping address included in the show notes of each episode. With Patreon, there's now an option for people who want to use Paypal or plastic to give small, recurring donations each time a new episode of P2P Connects Us is released.

To show my appreciation for those who make a pledge to the P2P Connects Us Patreon campaign, I've decided to give all patrons the opportunity to share in the LTBcoin distribution I receive every week. I'm setting aside 20% of the LTBcoin I receive and distributing it proportionally to everyone who pledges $1 or more to the P2P Connects Us Patreon campaign. All a patron has to do after they make a pledge is send me a private message in the LTB forum or through the contact page on my website, including a Counterwallet address and a link to a screenshot of the receipt from Patreon (since they do not show me the email address of people who make pledges). Then I will add you to the list of people eligible for an LTBcoin distribution proportional to your pledge – the more you pledge, the more LTBcoin you are eligible to receive!

Lately my share of the weekly LTBcoin distributions has been between 100K – 200K LTBcoin. So for example, if my distribution for a given week is 100,000 LTBcoin, then 20,000 LTBcoin would be set aside for the Patreon distribution. If a patron pledged $5 out of a total of $100 in pledges, then they would be eligible for a 1000 LTBcoin distribution, or 5% of the 20,000 LTBcoin set aside for Patreon contributors that week. After each distribution, I'll be posting a full accounting in the P2P Connects Us thread in the LTB forum showing how many LTBcoin I received in the distribution, how much was set aside for patrons, how much money the owner of a Counterwallet address has pledged, and how many LTBcoin they will receive. To protect privacy, the identity of patrons will be represented in the public accounting by their Counterwallet address. Since all of the distributions happen on the block chain, all accounting will be fully transparent and everyone will be able to verify that they're getting the right amount of coins.

Big thanks to all current and future patrons of the P2P Connects Us Patreon campaign!