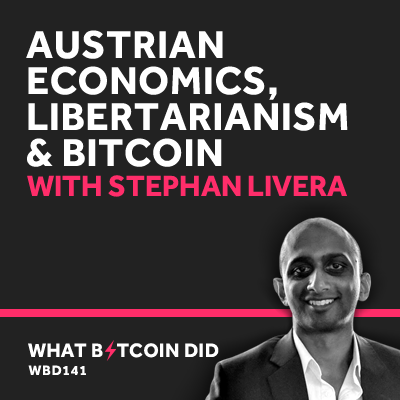 “Democracy is a soft form of socialism.” — Stephan Livera

Bitcoin is the perfect monetary tool for proponents of both Austrian Economics and Libertarianism. The principles of a free market, removing central banks and taking power away from the state are inherent features of Bitcoin.

These topics are hotly debated within the Bitcoin community but can also be difficult concepts for beginner’s to understand. Many have only known a world of identity politics dominated by left and right-wing arguments, and a shift to a society without a state is mostly theoretical. It is useful to explore these subjects, to challenge not only the role of the state but its reach. Are socialist policies flawed? Are salaries caps and minimum wage policies ultimately harmful? Why do free markets outperform regulated markets?

In this interview, I speak with my buddy and fellow podcaster Stephan Livera, to learn more about Austrian Economics and Libertarianism. Stephan explains why Bitcoin is the perfect tool for a free market and taking control away from the state.