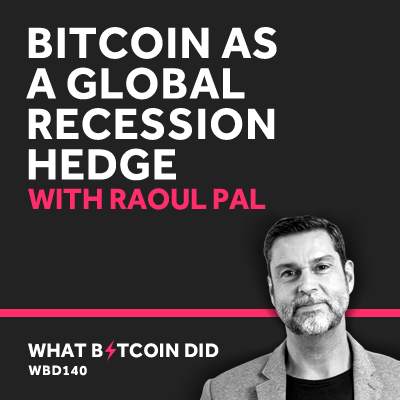 Raoul Pal on Bitcoin as a Global Recession Hedge - WBD140

"Chancellor on the brink of second bailout for banks" the Times headline on 3rd Jan 2009 and the now infamous words included in the Bitcoin Genesis Block. This was Satoshi Nakamoto's message to the world as the Bitcoin protocol launched. Many believe this was also a carefully chosen message to establish Bitcoin’s role.

The U.K.'s Chancellor of the Exchequer was about to bail out the U.K.'s failing banks for a second time. At the same time, Satoshi was releasing Bitcoin into the world as a way of controlling your own wealth, and bypassing the seemingly broken banking system. Now 10 years later, the world's economy is again in a fragile state with many economists predicting another global economic recession.

Bitcoin is seen as the antithesis to traditional finance, and if the global economy does turn to a recession, people may seek solace in Bitcoin as a hedge against legacy markets.

Raoul Pal is a leading macroeconomist who has worked for Goldman Sachs, managed hedge funds and advised to some of the largest funds in the world. He now runs Real Vision, a digital content platform with the aim of getting leading economist traders and hedge fund managers from across the globe to share their thoughts with everyone. Not just the select few.

In this interview, we discuss the possibility of a global financial crash, how likely it is that Bitcoin will become a safe haven, Bitcoins volatility, Brexit, as well as: